She missed court dates over fines for letting her horses run free. 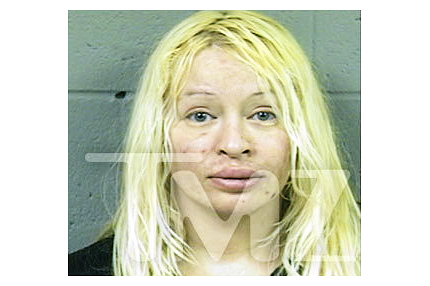 Former Smashing Pumpkins bassist D’arcy Wretzky is behind bars in Michigan for failing to appear at court dates on charges of letting her horses run free.

According to TMZ, Wretzky was ticketed for the crime of “Animals Running at Large” in 2009. Her ex-boyfriend Jeff Khoshaba said the horses somehow got free from their enclosures and her neighbors called the police. She never paid the subsequent fines and then missed four consecutive court dates. A bench warrant was issued for Wretzky’s arrest and she was taken to jail on Tuesday, February 8. She’s expected to be released on Monday.

The reclusive Wretzky, who left the Pumpkins in 1999, last emerged in 2009, when she randomly phoned into Chicago rock radio station Q101. She said she was living on a Michigan horse farm, adding that she quit the rock’n’roll life because she wasn’t healthy enough for it. She also praised the Silversun Pickups and even told a story about Marilyn Manson’s parents. [Via Pitchfork]

So… how about that mug shot, huh?