The new video from NYC's indie upstarts is a gleefully low-budget thriller. 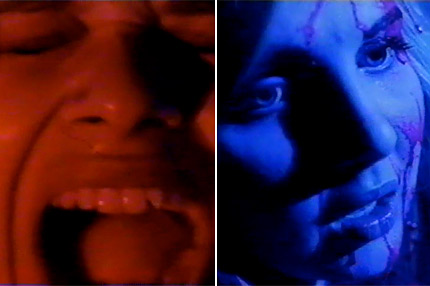 Shilpa Ray and Her Happy Hookers are an on-the-rise indie band from New York, with a “deranged” second album in stores Tuesday, Teenage and Torture. Check out their campy and effective version of a pre-CGI slasher film in their new video for “Heaven in Stereo” below!

The song’s ragged guitar licks recall early R.E.M., while Ray’s unbridled, aggressive howl possesses a Kathleen-Hanna-in-Bikini-Kill grit. It’s a combo whose “’80s vibe” and “tactile imagery,” to use Ray’s own words, provides a fitting soundtrack to the video, where a couple’s woodsy makeout sesh gets rudely interrupted. An angry wolfman stalks the lovers, then offs the boyfriend in a cartoonish scene worthy of Sam Raimi’s low budget cult classic, Evil Dead. But revenge is ultimately served with the elegance of a double-barreled shotgun.

“[It’s] vintage slasher 80’s film!” Ray gushes to SPIN. “What’s not to love? Sure the song sounds dark and heavy but it has a sense of humor. I’m pleased that the video portrays that.”

Ray also loved that director Will Joines conceived the video’s horror-style action in a way that didn’t require the band to act. “We could just play, ’cause that’s what we do best,” she says.

Watch the video below, and check out the Ray’s raucous live show — which she recently honed as the opening act (without the Hookers) for Nick Cave’s Grinderman — when her band’s nationwide tour commences in March (click here for dates). A record release bash is set for Jan. 21 at Brooklyn Bowl.