Watch the synth pop giants perform "Wrong" in Barcelona on their Tour of the Universe. 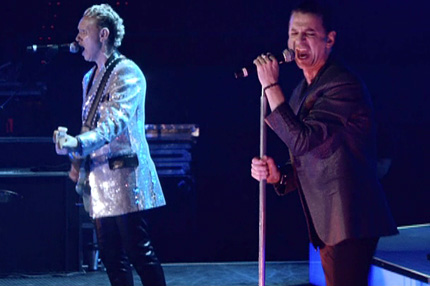 Depeche Mode are masters of the enormous live show. Heck, they once sold out the 100,000-capacity Rose Bowl. Now they’re releasing a DVD chronicling their 102-date 2009 tour in support of their Sounds of the Universe album, featuring performances captured over two nights last fall in Barcelona. Watch their performance of “Wrong” below!

The lead single off Sounds of the Universe, “Wrong” is classic Depeche Mode, with a minimalist intro underpinning Dave Gahan’s chanting of the song’s title. In the video, with the flamboyant Martin Gore wailing on guitar, and Andrew Fletcher coolly massaging his keyboards, Gahan croons in his deep baritone to 24,000 Spaniards at the Palau St Jordi.

The DVD, out Tuesday, Nov. 9, features 21 live cuts from the band’s two-night stand in Barcelona, including ginormous hits like “Personal Jesus,” “Enjoy the Silence,” “I Feel You,” and “It’s No Good.”

There’s also a second DVD featuring bonus content, including a tour documentary, behind the scenes footage, and all the music videos from Sounds of the Universe.

A deluxe version of the DVD also boasts audio tracks of all 21 live performances.

Watch “Wrong” and tell us what you think in the comments section.