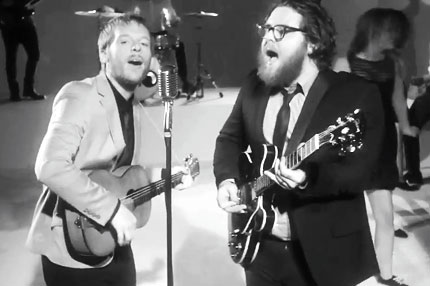 It’s been a few weeks of firsts for Bad Books, the new project led by Manchester Orchestra frontman Andy Hull and singer-songwriter Kevin Devine, including the release of their self-titled album, their first live show, and, now, their debut music video. Watch the retro-feeling clip for “You Wouldn’t Have to Ask” below.

Shot in black and white by director Jason Miller, who also helmed the latest (and quite sexy) Of Montreal video, the Bad Books clip riffs off the energy of ’60s music television, with a specific band in mind.

“Before we’d even talked about it at all — what song we were going to do for a video, if we were going to make one — a buddy of mine randomly sent me a YouTube link of the Everly Brothers doing ‘Gone Gone Gone’ on Shindig, I think, in 1964 and it’s almost psychedelic how crazy and rabid their dancers are,” Devine tells SPIN. “I’m not the most visual guy, but it felt clear that we should do something like that, and then everybody piled on with their ideas and set design and costume design.”

“It’s so campy,” adds Hull. “It makes me feel like I’m watching the British Office.”

Devine also thinks the video shows off another side of himself, Hull, and his Manchester Orchestra bandmates in Bad Books, all of whom have a reputation for writing intense, emotionally heavy music. “We do have serious things in our songs, and we do think about those things, but we’re also fuckin’ funny and loose people, and the video is more of a carefree thing,” he says.

But their collaboration as Bad Books is anything but carefree; both Hull and Devine think this album will be the first of many. “There’s like no logical reason why we wouldn’t continue to create, and I think the last two songs we recorded for the record — ‘Holding Down the Laughter’ and ‘Baby Shoes’ — are the best ones,” Hull says. “Kind of sets the bar for the next time we get in the studio. I think we’ll be more comfortable and even weirder.”

Adds Devine: “I really look at my career as halved, almost. There’s a totally new part of my life that’s developed since I’ve become friends with [Manchester Orchestra]. And it’s totally changed the way I make music; the way I am as a person too. That might sound ridiculous, but it’s really totally true.”

Watch the video for “You Wouldn’t Have to Ask” and tell us what you think of the collaboration in the comments.

WATCH: Bad Books, “You Wouldn’t Have to Ask”

Andy Hull Says That Manchester Orchestra Is His ‘Life’s Work’