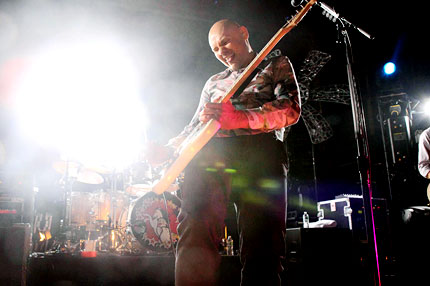 Billy Corgan has been getting all religious lately, but when he dropped into a Paris book store last week to promote Chants Magnétiques, a collection of short stories co-written by French author Claire Fercak, he had a different message for God: “Jesus Needs a Hit / He can’t quit / It’s far too late.” Watch the video performance below.

The song — part of an eight-song acoustic set — is classic Corgan, a romantic and moody ballad that compares god to love, love to god, and, apparently, drugs. Corgan told the audience — who cracked up when he mentioned the tune’s name, “Jesus Needs a Hit” — that he had just written the song “a few days ago.”

“So you’re the first people to hear this song, so when you go on the internet and say, ‘This song sucked, no good,’ you’ll never hear it again,” he said. “So you have a very big responsibility to like this song.”