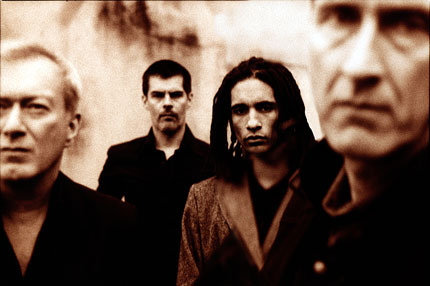 It’s been 15 years since Gang of Four released their proper last album, but the British punk pioneers will return with a new disc Content on January 25. The Gang are planning to return with a bang, too: the disc will be released on CD, vinyl and in a deluxe “Ultimate Content Can,” which includes ceramic art by founding members Jon King and Andy Gill, a book of photographs, lyrics, a scratch and sniff booklet and – no joke! – vials of the band members’ blood.

King and Gill – who last released an album of re-recorded songs, titled Return the Gift, in 2005 – have recruited bassist Thomas McNeice and drummer Mark Heaney for the album, replacing the band’s founding rhythm players Hugo Burnham and Dave Allen, who split from the group in 2008.

Gang of Four hope to match the experimental scope of their classic 1979 Entertainment!, which fused punk and funk with Marxist-themed lyrics, while appealing to a new generation of fans. “What I’ve been thrilled by over the years is that our music still seems to make sense to our audiences, however old they are, and these days they’re mostly under 30,” King said in a statement. “They tell us that our music means something, that it makes them want to go start a band. That amazes me. I would never have imagined when we started off that we would have this impact after such a long time.”

In an era where musicians are seeing diminishing returns on releasing recorded music, Gang of Four chose to include vials of blood with the release in exchange for fans’ donations to the recording sessions. (They did not explain why they chose to include vials of blood.) The band solicited money through the website Pledge Music, promising to also award fans who ponied up cash a limited edition live album on cassette. “The whole architecture of the music industry doesn’t make sense any more,” the band posted on their site back in April. “Record companies are taking more than ever before from artists and giving less than ever before to the people who want to listen to their music.”