Home » Features » Interviews » Nostalgia Is Not Gang of Four’s Passion

Being the lead singer of a strident rock band has virtues both public and personal. In his role as frontman for the perpetually influential post-punk unit Gang of Four, Jon King has generated his share of both intellectual napalm and rock history bona fides. But he seems positively giddy about his band’s latest acknowledgment.

“Well, this is one of the greatest moments in my life,” he begins, sitting down with SPIN via Zoom, casual and bespectacled yet dapper in a blue zip-up sweater and dark pants. “There’s a book by John Niven called Kill Your Friends that is set in the music business of the ‘80s. A great book. There are people in it like our former manager Chris Briggs and [major-label executive] Tracey Bennett and all these other people. The story is about a fictional A&R man who takes too many drugs and he’s getting his leg over all over the place. But the great thing is that he murders someone when he spots that the guy hasn’t returned his copy of Entertainment,” the band’s wildly influential, massively propulsive 1979 debut album.

“We should sell the book at our merch table,” he says before chuckling. “We’re going to sell Gang Of Four condoms. For your top left pocket.” Diehard fans will remember the drummer’s quip as a lyric to one of the band’s key tracks, “At Home He’s A Tourist.” 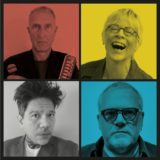 Of course, nostalgia never was the duo’s passion. But earlier this year, King and Burnham made heads swivel with a photo montage of themselves, bassist Sara Lee and guitarist Dave Pajo posted on the Gang of Four social media platforms. It was a low-key announcement revealing that the Gang of Four were reconvening to play gigs. Lee returns to the position she held for the band’s third and fourth LPs, Songs of the Free and Hard. Pajo, a key figure in the dynamic post-rock genre as a member of Kentucky indie group Slint (along with touring stints with Interpol, Billy Corgan’s Zwan and Yeah Yeah Yeahs among others) will be replacing original guitarist Andy Gill, who died in early February 2020.

Anybody who ever witnessed the quartet in their nascent days were genuinely shocked and enraptured. While punk was certainly being celebrated and embraced in the underground, Gang of Four were already drafting their own singular rock ‘n’ roll cartography. The indefatigably tight rhythm section of bassist Dave Allen (who left the band in 1981) and Burnham was the foundation of the band’s tense, murder-funk propulsion. Gill’s jagged guitar style was the urgent antithesis of the seemingly three-day solos perpetrated by arena rockers around the globe. Top it off with King’s left-leaning lyrics and vociferous vocal attack, and the quartet would routinely conjure balls of plasma every time they advanced onto a stage.

History has shown that the band’s vision has come to define the post-punk genre for decades. The amphetamine attack of “I Found That Essence Rare”; the flaming amp solo that opens “Anthrax”; and the slow-moving menace of “Capital (It Fails Us Now)” still carry the potency that seared the meninges of adventurous listeners over 40 years ago. It’s been a considerable run: King and Gill kept the name active until 2011, when the singer left, leaving Gill to continue the legacy with two additional LPs and frequent touring.

With the Matador Records box set Gang of Four 77-81 (a reissue of the first three full-length releases with additional studio, live and demo recordings) and the Gill-curated The Problem of Leisure tribute LP (with cover versions from Tom Morello and Serj Tankian, IDLES and Helmet among others), renewed interest in the band has spurred across generations of listeners. With the Matador set sold out of its 3000-copy pressing run and no additional new recordings to promote, there’s really only one reason for the Gang of Four to get on the road to throw down for 22 shows: Because they can.

“Life is not without a little risk,” Burnham says confidently and with great lucidity. “Life is nothing if you just sit back on your laurels.”

“It’s carpe diem, the seizing of the day,” King adds. “Having gone through this misery —the COVID misery of locking yourself down—there’s a point when you just have to say, ‘Kick out the jams, motherfuckers.’ It’s worth doing, because all we’ve learned over the last two years is [that] life’s too great not to put a bit of color into it.”

Of course, there were some things that needed to be addressed.

Despite being active in the Matador set and other ancillary creative concerns, Allen would be unavailable to assume the low-end for these dates due to what Burnham states as “family reasons.” Lee gladly rose to the occasion. But the 105db elephant in the room was replacing Gill. His style of flinty, jagged chords and seeming-mistakes (the overlapping space in a Venn Diagram of Dr. Feelgood’s Wilko Johnson and avant-garde randomizer John Cage) helped establish a whole new canon in rock. Nearly every punk, indie, industrial and post-metal guitarist who seemingly hit a wrong note or struck an ugly harmonic (and left it on their records) probably don’t realize from whom they lifted their tricks.

It truly weighed on Burnham, who was concerned about who would be capable of filling the expansive void left by Gill’s death. His friend Patrick Ferguson, host of the Crash and Ride podcast, suggested Pajo. “The obvious easy thing might have been anyone who’s still alive and played guitar for the Red Hot Chili Peppers. We wanted to do something more interesting and different. I said, ‘But it’s impossible. How do you fill those big shoes?’ It was like a light went off and Patrick said, ‘David Pajo. I just interviewed him, he’d be amazing.’ And David forgives me for this, but I said, ‘Who?’” [Laughs.]

The way Burnham explains it, Pajo didn’t have to navigate a learning curve as much as he had to establish an instinctual bend.

“Early on,” Burnham begins, “we said to him, ‘Look, this is not a tribute band. We’re not playing everything exactly the way it was.’ Which is good because if you just try to recreate exactly what’s on the record all the time, it gets rather dull. So it’s just like, ‘honor it, respect it’. He listened to a lot of live stuff so he could ascertain what Andrew’s focus was on each song. And now he’s made it his own.”

The next step would be to fortify their intentions. These days, announcements of any band’s reconvening are typically embraced by ardent true believers and friendless cynics. “Reunion cash grab” is a popular term in both the rock journalism lexicon and fan forums, and for good reason: It’s harder to be in a band more than ever. From the decline of physical-format music sales to the paltry royalties offered by streaming services to (not) touring in a pandemic, it’s hard to believe that there isn’t a war on musicians.

But the band aren’t necessarily packing their bags for a nostalgia trip. They never had a feel-good pop single, a bro-dude, football-huddle theme or the lachrymose love song that reminds anyone of the first time they had their genitals felt by someone outside of the medical profession. (No, “Anthrax” doesn’t qualify.) The relentless, near-punishing level of pop music marketing will never be particularly forgiving to legacy bands. Come on: The fury of a spark-throwing Gang of Four song has an essence that simply can’t be distilled into the length of a TikTok clip. Although Lee and Pajo have remained professional touring musicians, King (a former executive at VICE Media who is now consulting) and Burnham (an active assistant professor of Experiential Learning at Endicott College) have followed more secure pursuits. The marketing copy for Devo’s 1978 debut album heralded the release as “The important sound of things falling apart.” Civilization is still saddled by the same things that the band railed upon in their self-detonating beginnings. As the emotional seismograph measuring America’s descent into a second civil war skips and jumps wildly every day, Gang of Four are uniquely qualified to chronicle the proceedings.

“There are the themes that we talked about all those years ago,” King acknowledges, making uncomfortable connections from eras allegedly past. “Rock Against Racism: Black Lives Matter, police brutality. The threat of nuclear war; the threat of war in Ukraine [today]. These are deep threads I would have hoped when we did all this stuff originally, would have gone away. Like they’d all be a historical oddity, like smoking a pipe.”

Inescapably, there is that minutia that no band with an extensive legacy can ever avoid. In Gang of Four’s case, that could be anything from what shows up on the setlist to what kind of appliance King might take a ball bat to for the intro to “He’d Send In The Army.” And naturally, how Pajo may fill Gill’s shoes. (“Dave has big feet,” Burnham assures.) There’s also the stark resonance of their art continuing to imitate life: like the reminder how it is scientifically proven how difficult it is for the majority of Americans to change their socioeconomic mobility. In 2022, Gang of Four are poised to bring the heat. But instead of it being the warmth of fuzzy-slippered memories with a nice cup of tea, it’s more like accidentally placing your hand on a stove burner.

“You’ve been in rock ‘n’ roll your whole life,” King tells this writer. “And so have we. Being in a room with a load of people centrally focused on one thing they recognize is a great trip and a great opportunity that I’m so honored to be part of. I’m a participant and I’m also an observer of it all. And it’s a joy. We’ve just got to seize the day and assert ourselves.

“I often quote the film The Third Man, which had Orson Welles talking on top of the big roundabout in the ruins of Vienna at the end of the war. He’s been selling adulterated penicillin too, which is causing lots of death. In his monologue, he says, ‘In Italy, for 30 years under the Borgias, they had warfare, terror, murder and bloodshed. But they produced Michelangelo, Leonardo da Vinci and the Renaissance. In Switzerland, they had 500 years of democracy and peace. And what did that produce? The cuckoo clock.’” He smiles politely as Burnham’s smirking gives way to laughter.

King pauses for a moment. “We’ve never been in the business of making cuckoo clocks.”