The anthemic alternative rockers share the story behind their name. 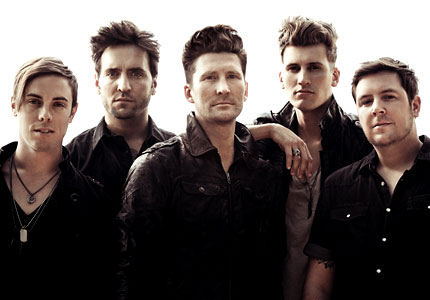 This week: Florida alt-pop band Anberlin, whose new album Dark Is The Way, Light Is A Place is out September 21.

Why Anberlin: “I was in my dorm room at the University of Central Florida in 2002,” says lead singer Stephen Christian, “and I was listening to Radiohead’s Kid A. I was infatuated. I listened to that album every night for a month. But in the song ‘Everything In Its Right Place,’ I thought I kept hearing something in the background that sounded like Thom Yorke was singing the word ‘Anberlin.’ I kept hearing it: ‘Anberlin,’ ‘Anberlin.’ I searched online for ‘Radiohead and Anberlin,’ ‘Thom Yorke and Anberlin’ but didn’t find anything. Eventually I realized that I must’ve been mishearing something and that the word ‘Anberlin’ was a figment of my imagination. It has no meaning. I just liked the sound of it and thought it was original. I thought it would be a good band name.”

Previously Rejected Names: “The other guys in the band thought of using Laredo, but I felt like that would be a great name for a country band but not for us. At one point I really wanted us to be called the Clamor, but the other guys thought it was too much of a punk thing, like the Clash.”

Best Band Names Ever: “Being raised in a Christian home, I always liked names that the bands themselves had nothing to do with, like when people said AC/DC stood for Anti-Christ Devil Child or that KISS was short for Knights in Satan’s Service. My mom knew all of those.”