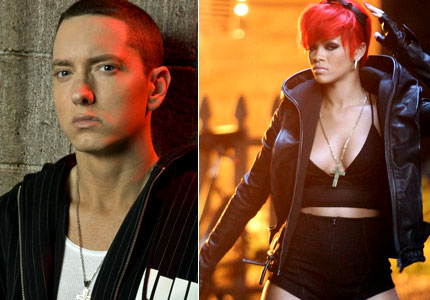 Eminem’s Recovery single “Love The Way You Lie,” featuring vocals from Rihanna, is sitting in the No. 1 spot on Billboard’s Hot 100 chart, but the Detroit rapper and the Barbadian beauty’s video for the single is looking to be even hotter.

According to an E! Online source, sultry Transformers babe Megan Fox and Lost actor Dominic Monaghan will both appear in the clip and are scheduled to film their segments Thursday and Friday in Los Angeles. Their scene will be quite steamy, too. E!’s source said their roles are inspired by Eminem’s relationship with his ex-wife Kim. “Things start off with a sex scene between Megan and Dominic,” the source said. “Then they fight but end up having sex again.” The source described the video as “gritty” with “lots of passion.”

Em and Rihanna started shooting the video Tuesday, and SPIN scored a photo from the set of Ri-Ri singing in front of a burning house. According to MTV, Eminem later joined her, performing together as the white picket fences went up in flames. Rap Radar has a pic of the two embracing in front of the charred home.

The video’s director Joseph Kahn — who has helmed clips for Blink-182, U2, and Lady Gaga, among others — has been Tweeting about the video. On July 15 he wrote, “Got off a call. Emergency music video. Gonna write and turn in a treatment in three hours to shoot ASAP.” On the set July 21, Kahn took to Twitter to vent his frustration with the photographers infiltrating the video’s set. “Paparazzi, stop trying to ruin my shots,” he wrote.

Eminem graces the cover of SPIN’s August issue. To read an excerpt from the story, click here. To see behind-the-scenes photos of the Detroit rapper at the cover shoot, click here.

What do you think about Eminem and Rihanna’s “Love The Way You Lie” video? Tell us in the comment section below.