The trippy rockers treat an in-studio audience at the late night TV show to 10 songs! See it all here. 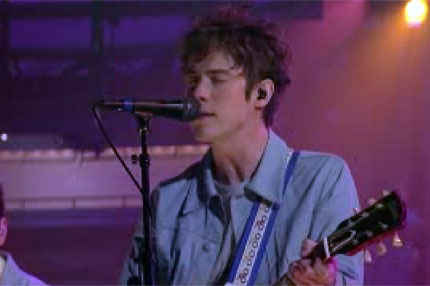 Special artists get special privileges on The Late Show with David Letterman — as was the case when MGMT stopped by last night and performed an entire gig for the studio audience after taping the show. Watch their ten-song set in its entirety below!

Broadcast live online, the concert went off without any usual network TV censorship; the band sang about shooting heroin and fucking with the stars, and frontman Andrew VanWyngarden introduced “It’s Working” by saying “This is a song about doing drugs.”

The special set featured the quintet mixing up songs from the recently-released Congratulations, 2008’s Oracular Spectacular, and even one jam (“Destrokk”) off their debut EP, Time to Pretend.

MGMT will resume their U.S. tour on May 28 in San Luis Obispo, CA — but for now, enjoy their Letterman set right here.