See the influential Beatle's early days in Liverpool from the upcoming "Nowhere Boy." 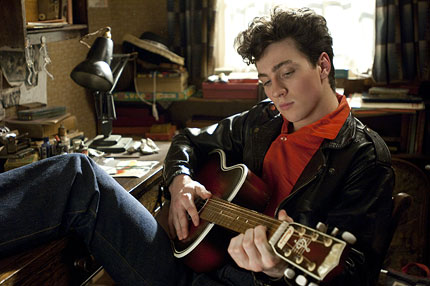 A new trailer has hit the web for Nowhere Boy, the upcoming John Lennon biopic that chronicles his Liverpool upbringing and early Beatle days. Watch it below.

Featuring Kick Ass star Aaron Johnson as a young Lennon, the biopic is slated for an October 8 release.

In one early scene, we learn the origin ofthe phrase “nowhere boy”: After a scornful teacher says the rebellious future Beatle is “going nowhere,” Lennon replies: “Is nowhere full of geniuses, sir? Because I probably do belong there.”

The clip also includes Lennon’s moment of revelation while watching Elvis perform at a movie theater packed with frenzied fans. “Why couldn’t God make me Elvis?” Lennon asks. His girlfriend responds: “Because he was saving you for John Lennon!”

The film highlights Lennon’s dramatic relationships with his hard-nosed Aunt Mimi (who raised him) and his mother Julia, who died when he was a teen. But the most exciting scenes depict early Beatles days, with Lennon and McCartney (Thomas Sangster) playing together at Lennon’s house.

Catch the trailer below — and let us know what you think in the comments section below.