The punk rockers talk up next week's Broadway debut and more on Late Night. 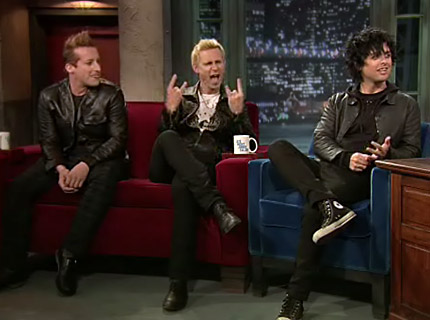 Green Day stopped by Late Night with Jimmy Fallon to chat about the musical version of their 2004 punk rock opus, American Idiot, which premieres April 20 at Broadway’s St. James Theatre. Watch the interview below!

“It was such a big crazy idea, but that’s what you’re supposed to do when you’re in a band,” lead singer Billie Joe Armstrong told Fallon of taking his music to Broadway.

The idea for the original album stemmed from the title track, Armstrong recalled. “We had the song ‘American Idiot,’ which is very political and about feeling pissed off about the way things were going for eight years with the worst president we ever had,” he said. From there, the band wrote the rest of the politically charged material.

If seeing American Idiot live isn’t enough, fans can play the tracks themselves on the Green Day’s installment of the popular Rock Band video game (out June 8). But don’t look for the band members themselves to set any high scores. “I suck at Rock Band,” drummer Tré Cool admitted.

After the musical launches, Green Day will head to Europe for festival gigs and other shows through early July before heading back to the States in August for a slew of dates with fellow NoCal rockers AFI that includes a stop at Chicago music fest Lollapalooza. Click here for tour dates.