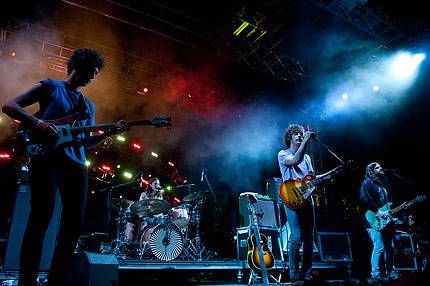 BEST BALLSY MOVE: MGMT
“Kids” is to MGMT’s Andrew VanWyngarden, as “Smells Like Teen Spirit” was to Nirvana’s Kurt Cobain: a ubiquitous pop track that made them famous, but ultimately worked against their artistic vision, as fans continued to demand the sound the band wanted to leave behind. And Saturday night at Coachella, MGMT did just that, omitting their most popular song while playing to some 40,000 people. Ballsy! Just days after its release, the Brooklyn band instead focused on their psychedelic new album, Congratulations, and the songs sounded practiced and lively, solidifying MGMT’s second coming as a true five-piece band. “Dan Treacy” built to tambourine smashing jive; “It’s Working” was harpsichord-heavy makeover of the Zombies’ Odyssey and Oracle; and “Brian Eno” was a bubble-gum goth jam that had the crowd dancing more than any other Congratulations track. But Vanwyngarden threw the headband-wearing crowd a bone, too: “Who’s on drugs?” he asked before Ben Goldwasser unleashed the familiar, pulsing keys of “Time to Pretend,” with VanWyngarden and thousands of fans singing, “I’m feeling rough / I’m feeling raw / I’m in the prime of my life.” WILLIAM GOODMAN

BEST SPECTACLE: MUSE
It was one oh-no-he-didn’t moment after another as Muse singer, guitarist, pianist and unapologetic showoff Matt Bellamy pulled out all the stops in a truly over-the-top performance on the main stage. Playing the guitar over his head and behind his back? Sure. Tacking a truncated version of Van Halen’s “Eruption” onto the end of “Plug In Baby” from 2001’s Origin of Symmetry? Absolutely. Uncorking a potentially blasphemous Hendrix-at-Woodstock-style guitar cover of “The Star-Spangled Banner”? Uh, okay. The funny thing: It all worked. When you’re the lead singer of the biggest, best, most theatrical prog-glam-rock-opera-jam-band in the world, showboating is exactly the point. LIAM GOWING

BEST SUMMER ANTHEM: GIRLS
Coachella is a sneak preview of summertime, and this summer needs an anthem. May we suggest “Lust for Life,” a jangly ballad by San Francisco’s Girls with a supa-dupa fun bass line? Off one of SPIN’s favorite albums of 2009, it had a midday crowd crooning about pizza, suntans, and being friends forever. Led by frontman Christopher Owens, a former member of the Children of God Cult, this band clearly has a big year ahead, judging by the eclectic mix at the Gobi Tent hanging on every lyric and boogying down. Yes, “Lust for Life” really is that irresistible. And so was the next song in the set, a cover of the Everly Brothers’ “Dream.” W.G.

BEST ENTRANCE MUSIC: STEEL TRAIN
Walking into the venue to the sounds of “Dancing in the Dark,” as lovingly covered by New York indie band Steel Train, rising and shining early on the main stage, set a good tone. All that was missing was Courtney Cox dancing awkwardly onstage. STEVE KANDELL.>

BEST DIRTY JOKE-TELLER (EVER): JOHN WATERS
It was a no-holds and no-holes-barred event as wacky, tacky film director John Waters opened Day Two’s festivities with a hilarious monologue comprising the best moments from his film career (like his favorite transvestite leading lady Divine crawling through real pig shit while shooting 1969’s Mondo Trasho), his favorite drugs (“poppers”), and a thorough rundown of the latest sexual perversions (Google “sploshing” for a taste of the goods). Then there was his litany of as-yet-unrealized dreams: Female urinals, an all-abortion film festival; a USO tour with Iggy Pop wrestling fake Bin Ladens; and of course, his plan to turn the gay marriage debate on its ear by pushing to ban heterosexual divorce instead. Ideas likely to catch on? No. Funny as hell? Yes. L.G.

BEST VOLCANIC FALLOUT: RAVEONETTES
All together now: “Hooray for Icelandic volcanoes!!!” With their band stranded in Europe, the Raveonettes were forced to choose: cancel (as a handful of other scheduled performers opted to do) or play as a stripped-down duo. They chose the latter and the result was the one of the best gigs at Coachella so far. Sure, the Raveonettes perform as a duo often — and began their career that way — but this was different, an ad-hoc set steeped in charm, without a drum machine or any other musical aid available. “This is an odd experience for us,” said singer/guitarist Sune Rose Wagner. “That volcano is not our best friend.” But it was certainly a friend to the fans at the packed Gobi Tent. Wagner and Sharin Foo stripped the Raveonettes to its essence, playing songs like “Attack of the Ghost Riders” with steamy sex appeal (courtesy of Viking princess Foo) and an up-from-the-gutter surf- and garage-rock sound (courtesy of brooding guitar whiz Wagner). Foo stepped out for a solo “Oh, I Buried You Today,” a slow, 1950s bubblegum pop ballad, while Wagner ripped through “Little Animal,” shyly detailing his girlfriend’s sex drive while blasting reverberated surf riffs. Then they teamed for “Wanna Dance,” singing lip-to-lip at the mic and smiling. “We were so nervous for this,” Wagner said to the rapturous crowd. “Thank you, thank you.” W.G.

BEST SUNSET DANCE PARTY: HOT CHIP
Kinda like last night’s LCD Soundsystem set, Hot Chip’s show felt like a graduation from the dance tent. (Not that people didn’t dance, there were just more of them.) Also like James Murphy, the band dressed for the occasion, wearing tasteful sport jackets — Alexis Taylor looked like a Rivers Cuomo action figure — and made their dance-pop feel spontaneous and organic and warm thanks to touches like the steel drums on “One Night Stand.” But it was “Over and Over” that perked things up — they’ll give us laid-back, for sure. S.K.Read More From Coachella Day Two On Page 2 >>

BEST VOCAL DELIVERY: AMBER COFFMAN OF DIRTY PROJECTORS
The Dirty Projectors are far too disciplined to disappoint. Leader Dave Longstreth is a notorious taskmaster who keeps his band in near-constant rehearsals, the most stunning result of which is the combined vocal might that the DP’s quartet of singers offer up every time. But though Angel Deradoorian and Haley Dekle have pipes worthy of their own entries, rhythm guitarist Amber Coffman established her superlative gift early on in the set. Taking on David Byrne’s vocal part on Dark Was the Night standout “Knotty Pine,” she revealed a powerful, high-amp organic weapon that may very well be more dangerous than the embattled guitar of Tom Morello, who performed on Friday with Street Sweeper Social Club. CHRIS MARTINS

BEST REVIVAL: ALMIGHTY DEFENDERS
The Almighty Defenders’ fourth show ever was like a garage-gospel revival brunch greeting hungover sinners. The high (perhaps literally) priests — an unholy mix of the Black Lips and King Khan and BBQ Show — took the church theme to its logical, farcical conclusion, as all six members wore matching Episcopal robes (one with a Braves cap), hopefully made of breathable cotton, throwing in a Bible reading and dedication to the Pope (Elvis’ “He Touched Me”) for good measure. You walked away, if not quite believing in the power of Christ, then at least in the power of perfectly executed ramshackle garage-rock. Your sins were forgiven, just in time to go out and rack up a new batch. S.K>

BEST USE OF BLING: BEACH HOUSE
Alongside Girls, recent Sub Pop signing Beach House was one of the highlights of the first half of the day. But while most of the earlier tent-bound acts seem content to peddle their wares without any over-the-top stagecraft, the Baltimore-based three-piece embraced some serious flashiness by way of five large, sequined, diamond-shaped disco balls they brought onstage. The angular objects spun while the band unraveled its patient, hazy dream-pop, effectively underlining the low-key glitz that lies just beneath all that gorgeous atmosphere. C.M.

BEST FRETWORK: BAND OF SKULLS
It wasn’t hard to spot the influence of guitar guru Jimi Hendrix on Band of Skulls’ Russell Marsden. Fuzzed-out, Fender-supplied guitar tone? Check. Conjoined vocal melodies and guitar riffs? Check. Whammy-bar-controlled feedback solos? Check. Still, the guitarist and singer was more than just Hendrix’s “Voodoo Child” to the mid-afternoon crowd that wedged into the Gobi Tent to hear tracks from his band’s 2009 debut Baby Darling Doll Face Honey. Thanks to the potent and psychically tight rhythm section of bassist and co-vocalist Emma Richardson and drummer Matt Hayward, this U.K. power-trio was just fine as the sum of its parts. L.G.

BEST SURPRISE SUPERSTARS: THE TEMPER TRAP
It’s not a massive shock that the Melbourne five-piece the Temper Trap are starting to gain a little momentum: Their poppy mini-epics play like TV on the Radio with all the rough edges sanded off, perfect for prime TV placement. But the crowd for the band’s midday set was more packed and amped up than maybe even the band members themselves could have expected. Frontman Dougie Mandagi may have yet to learn Chris Martin’s flair for the dramatic, but his dramatic falsetto (Kyp/Tunde), along with touches like pounding on a second drum kit at the front of the stage (Yorke for “Bangers and “Mash”) are a good start. S.K.

WORST KEMPT FRONTMAN: EDWARD SHARPE
While it’s true that Alex Ebert gave the shirt off his back to a photographer he’d accidentally bloodied (after knocking a mic stand into the man’s head), that dirty frock was due to come off soon enough. The man otherwise known as Edward Sharpe was barefoot to begin with, leading his hippie cohorts in the Magnetic Zeroes through a set of church revival-styled stompers, tribal chants, and general jangly jamitude. His ragged dust-colored pants looked like they’d never been washed, and the same might be said for the dreads and beard that framed his face. No wonder Jay-Z and Beyonce left their cherry front-and-center positions for backstage after a couple of songs. C.M.

BEST COVER, DAY TWO: CORINNE BAILEY RAE
Just 10 days after opening her U.S. tour with a near-religious show in Los Angeles, the Grammy-winning Brit songbird and her five-piece backing band hit Coachella with equal emotional force. But between the heart-wrenching acoustic ballads of her just-released second album, The Sea, the 31-year-old’s first since the March 2008 death of her husband Jason from an accidental overdose, she lightened the mood with a breezy, funky cover of the Flamingos’ classic “I Only Have Eyes For You.” W.G.

IN BRIEF
Vampire Weekend singer Ezra Koenig was spotted watching Dirty Projectors from the sidelines — with a sweater knotted around his shoulders, no less. C.M.

Whether she was sneaking snippets of Labelle’s “Lady Marmalade” and Talking Heads’ “Psycho Killer” into “Listen Up!” or attacking “Standing in the Way of Control,” vocalist Beth Ditto was in fine form as she lead her band Gossip through a crowd-pleasing set at the Mojave Tent. L.G.

Relentless paparazzi photogs scanned the Press/VIP area, occasionally bombarding some E-list, quasi-celebrity that I didn’t recognize with camera flashes. Rumors of Kristen Stewart cruising the Polo Fields only multiplied the numbers scouting the entrance to the exclusive backstage area, waiting for a chum bucket of celebrity to spill out for them to feed on. Ick. W.G.

Tom Petty’s keyboardist Benmont Tench was milling around, leading to some Petty-playing-Coachella speculation on Twitter. By us. S.K.

Sure, there’s traffic, lines, and all sorts of other logistical glitches, but there’s one thing Coachella does very, very right: tacos. I highly recommend the carne asada at the Mexican Grill in the Beer Garden. W.G.