Plus: The guitarist's girlfriend, Paramore's Hayley Williams, gives thanks on Twitter. 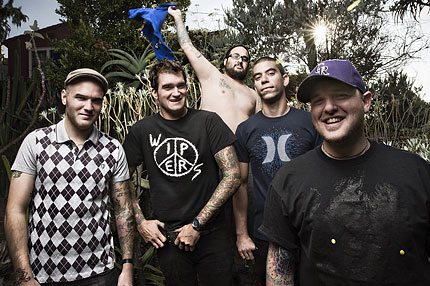 After undergoing thyroid surgery on Tuesday to remove a suspicious lump, Chad Gilbert of Florida-born pop-punk band New Found Glory has shared his cancer-free status with fans via Twitter. Check out a Twitpic of his bandage-covered throat here.

“Laying in my recovery room… I’m ch ch chillin,” Gilbert Tweeted Wednesday. “They removed half my thyroid but no cancer. Thanks for the prayers.”

Hayley Williams, Gilbert’s girlfriend and singer for Paramore, also took to Twitter, telling fans to “never take what we have for granted. One life, one chance!!!”

Guitarist Anthony Raneri of Long Island, NY, band Bayside has stepped in for Gilbert on New Found Glory’s current tour, until the 28-year-old axeman has recovered from his operation.

New Found Glory released their sixth studio album, the aptly titled Not Without a Fight, last March. In late October, the band treated 100 hometown fans to a private concert at their intimate rehearsal space, where they were preparing for their upcoming tour. Check out photos from the show here.