It's an Alice in Wonderland-style drama in the pop-punk band's mind-bending new video. 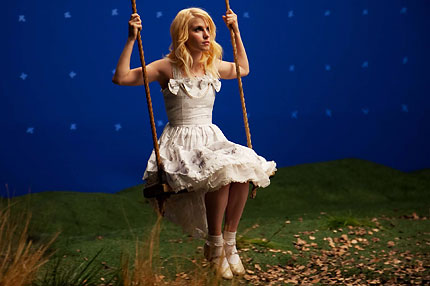 Watch the video below — and join Williams at the bottom of the rabbit hole!

The Tennessee fivesome shot the video in Los Angeles in October with director Meiert Avis, the man behind the lens of U2’s “Where the Streets Have No Name” clip. “He gets where we’re coming from, with the whole fantasy thing…” Williams told MTV of the video. “We’ve built this whole world.”

She’s not joking. As Williams narrates, climbing higher and higher on a tree-swing, the other band members play extras (guitarist Josh Farro a gravedigger; bassist Jeremy Davis a knight; and drummer Zac Farro a bank robber) as a young girl with butterfly wings explores a fantasy world — which soon comes crashing down.

“You built up a world of magic /? Because your real life is tragic,” Williams screams, “Go get your shovel ?/ And we’ll dig a deep hole? / To bury the castle.” The song is the band’s most epic yet, and its video is a perfect fit — a conceptual, big money shoot, rarely seen in music videos today… well, unless you’re Lady Gaga.

Watch the “Brick by Boring Brick” video, then tell us what you think in the comment section!