The Brooklyn quartet play their indie classics with orchestral accompaniment. 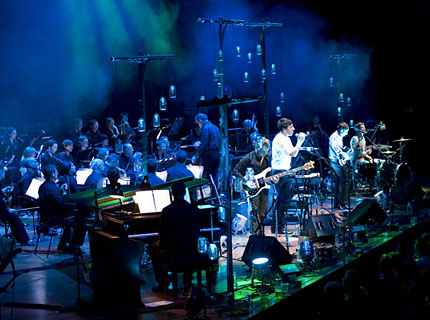 This year, Halloween in London provided for a truly haunting pairing. That’s haunting in the “beautiful! goosebumps!” sense and not the poltergeist one, and it’s entirely due to the much-hyped union of the London Symphony Orchestra with Grizzly Bear at the Barbican Centre.

The members of Grizzly Bear were keen to emphasize their own awe at the opportunity the evening presented, with bassist Chris Taylor asking the audience, “Does this feel as fancy for you guys as it does for us? Fancy enough to go out to dinner and everything?”

Despite the wide-eyed repartee, the critically adored quartet are relatively familiar with this sort of set-up, having played with both the Los Angeles and Brooklyn Philharmonic on prior occasions. Grizzly Bear are to orchestral accompaniment what greyhounds are to racetracks: They were built to excel in this situation.

Still, as they repeatedly pointed out, this time was special. The atmosphere was distinctly vintage Broadway — jam jars were strung from freestanding trusses, and periodically lit for a lingering fireflies, Huck Finn effect. Super-arranger Nico Muhly (the go-to guy for bands including the Arcade Fire) dusted off his tails and manned the piano, while LSO conductor Jim Holmes presided over the world-renowned ensemble.

Set highlights came fast and furious: Oft-remixed Grizzly tune “Knife” was treated to its most exquisite reinterpretation to date (sorry, Girl Talk), with the LSO string section lending an epic Rodgers and Hammerstein supplement to the chorus; “Two Weeks” dipped into The Nutcracker territory thanks to the spare but magical sonic accessorizing of the LSO harpist, and “Central and Remote” was rendered a tragic opera, with frontman Ed Droste’s wailing vocals augmented by a thundering classical score.

When all was said and done, a standing ovation was hardly a surprise. The encore proved another unsurprising development: If there was any doubt about the band returning following set closer “Ready, Able,” the sheepish lingering of the symphony — too bulky to pack up and leave purely to keep the mystery alive — put that cliffhanger to rest. The guys soon returned for final tune “Colorado,” before bidding the crowd another “honored” and “thankful”-laden adieu, and sending the audience home sans trick, yes, but with one serious treat to savor.

Melissa Goldstein
Tags: Grizzly Bear, We Were There