EXCLUSIVE: The metal band discuss "Beauty Through Order," their first tune ever written from the female perspective! 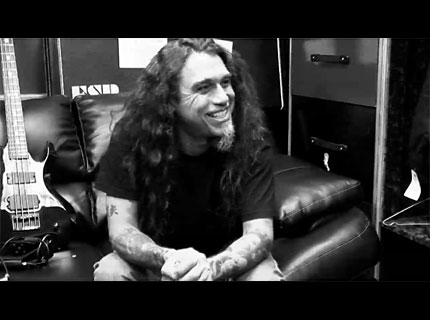 With World Painted Blood, Slayer’s new album out Nov. 3, the Huntington Park, CA, quartet tried out some new tricks — including writing a song from the perspective of a woman for the first time ever!

During the band’s co-headlining Metal Mayhem tour this summer with Marilyn Manson, the boys took a breather to discuss the inspiration, recording process, and uncharacteristic viewpoint of the cut “Beauty Through Order.” Watch the SPIN.com exclusive video below.

“It’s about the first known female serial killer,” bassist Tom Araya says of the tune. Adds guitarist Jeff Hanneman: “I’ve been meaning to write a song about that for a long time. I couldn’t figure out the angle, I was thinking, ‘How does a woman write? I can’t write like a woman I’m a guy!’ Then I just figured, ‘Well, she’s evil; she has lots of power and killed people.’ So I just started writing and the lyrics and they came out.”