The folk-rock four-piece takes a break backstage at Lollapalooza to redo a lo-fi classic. 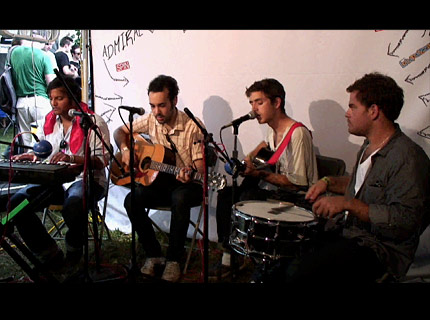 When Ezra Furman and the Harpoons stopped by SPIN’s backstage tent at Lollapalooza in August, the folk-rock foursome gave us a keyboard-heavy, pop-rock rendition of Daniel Johnston’s “Walking the Cow,” a 1983 lo-fi ode to uncertainty. Watch the video below.

With their rendition, singer/guitarist Ezra Furman and keyboardist Job Mukkada trade vocals on the choruses, while lead guitarist Andrew Langer and drummer Adam Abrutyn keep the pulse of the original song going.

WATCH: Ezra Furman and the Harpoons, “Walking the Cow”