Numerous clips of the R&B star's talk show appearance leak -- causing him to defend his statements. 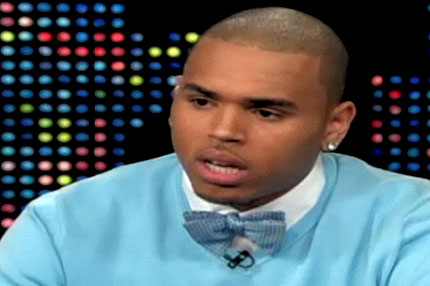 To promote Brown’s first public interview since his arrest in February for the pre-Grammy altercation with then-girlfriend Rihanna, CNN yesterday released a teaser clip of the singer’s appearance on Larry King Live, which is scheduled to air Wednesday night. (Watch the teaser video here.) In the clip, Kings asks, “Do you remember doing it [hitting Rihanna]?” Brown answers, “No.”

That response unleashed a firestorm of criticism on blogs and message boards yesterday, causing Brown’s camp to release a statement in his defense: [via MTV]

“There have been reports on the Internet that I didn’t remember what happened that night with Rihanna. I want to try and set things straight. That 30 seconds of the interview they used of me was taken from a one-hour interview during which that same question was asked something like four or five times — and when you look at the entire interview, you will see it is not representative of what I said.

“The first four times — or however many times it was — I gave the same answer, which was that I didn’t think it was appropriate for me to talk about what happened that night. I said it was not right for me and it really wasn’t fair to Rihanna. The fifth time — or whatever it was — I just misspoke. I was asked, ‘Do you remember doing it?’ and I said, ‘No.'”

Elsewhere in yesterday’s CNN video clip, Brown — whose abuse of Rihanna allegedly has a lengthy history — claims he still loves the Barbados-born songstress. And in a new teaser released today, Brown adds, “I guess that night is just one of those nights I wish I could just take back, and I really regret and I feel totally ashamed of what I did.”

Brown was sentenced to five years probation, one year of domestic-abuse counseling, and 180 days of community service. He cannot legally see Rihanna until his probation term ends on August 25, 2014.