Plus: The Southern rockers tap Justin Timberlake, Linkin Park, and more for a new remix album, and plan a live DVD. 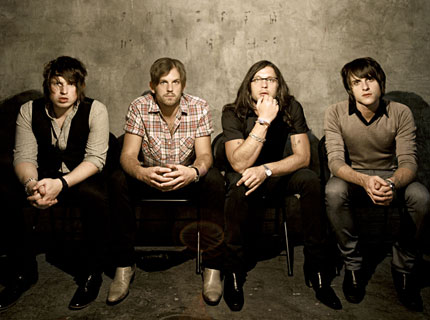 With 2008’s Only By the Night, Kings of Leon fused their characteristic Southern rock guitars with more exploratory studio sounds — but the boys haven’t satisfied their experimental side just yet. The Tennessee quartet have been writing songs for a new album during sound checks of their current tour, and according to drummer Nathan Followill, the band is more sonically adventurous than ever.

According to Followill, the band has “a good eight or 10 ideas kicking around” for their next release, and though the boys plan to take a rest at home this coming holiday season, he’s confident the quartet will back in the studio soon.

Though street dates have yet-to-be-announced, Kings of Leon are also planning a pair of new releases: a live DVD filmed this July in England at the O2 Arena, and a remix album featuring tweaked versions of their songs by Justin Timberlake, Pharrell, Mark Ronson, Kenna, Lykke Li, and Linkin Park, among others. Meanwhile, frontman Caleb Followill is preparing for an appearance on Iron Chef this fall. For details, visit Billboard.