The Followills play for the cameras in NYC -- and make the ladies swoon. 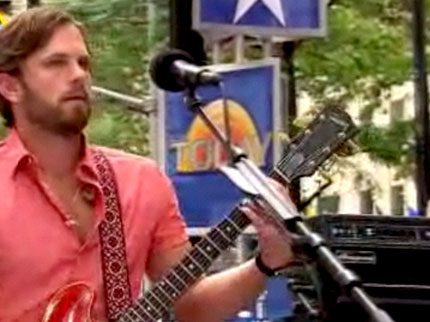 There’s no denying that Kings of Leon are one of America’s biggest rock bands, especially now that the Followill boys have been beamed into living rooms and kitchens nationwide this morning on NBC’s Today Show.

Watch the lads storm through Only By the Night tracks “Use Somebody,” “Sex on Fire,” and “Notion” below.

The “Notion” clip is preceded by a quick interview with Meredith Vieira in which she notes that there were more ticket requests for the Kings’ Today Show appearance — 20,000 in total — than for any other band they’ve booked for their concert series. She also pulls a quote from our October 2008 cover story on Kings of Leon and takes it completely out of context.

Vieira references a line in the piece where writer David Peisner characterized the public reaction to the band as “ecstatic overseas, muted at home” — but he was referring to an earlier period in the band’s career, not the present day, when Kings of Leon are clearly a rock’n’roll juggernaut in their home country.

Check out the videos here: