The SoCal band shift from funk-metal to groovy pop-rock during their 90-minute San Diego set. Click here for a review! 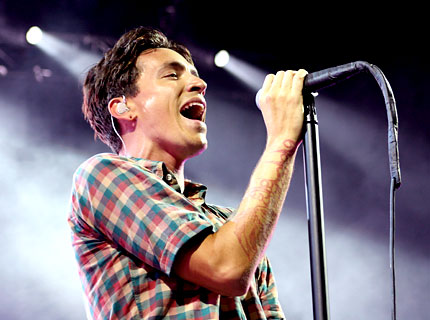 It was apparent early on that Incubus’ tour-opener in San Diego Thursday night wasn’t going to include a whole lot of messing around. The band that expertly juggles the move from Ozzfest to Gap ads utilized that same dexterity throughout their 90-plus-minute set.

While alternating between funk-metal blasts like A Crow Left of the Murder’s “Megalomaniac” and pop ballads like Light Grenades’ “Love Hurts,” frontman / heartthrob Brandon Boyd let his songs do the talking and kept chatter with the audience to a minimum.

The set’s midpoint, however, found Boyd open up a little prior to a deafening sing-along. “I’ve known this guy since we first had pubes,” Boyd joked before he and guitarist Mike Einziger played an acoustic version of “Drive.” The audience sang the gentle hit so loud that Boyd stepped away from the mic and let them take the lead on its last verse. They belted even louder without Boyd’s help, and were praised for their work: “Your singing is the coolest thing in the world,” the frontman said.

Next, Boyd grabbed a djembe drum and the band served up an acoustic version of “Dig,” allowing the audience to continue singing along.

Then the quintet offered up a steady second half that included the rock of “Redefine” and the somber synths of “Quicksand.” The band also played “Wish You Were Here” and a new, similar ballad called “Black Heart Inertia,” both of which appear on their just-released greatest hits album, Monuments and Melodies.

And they weren’t the only ones acting like it was the last day of school. Before Incubus took the stage, openers the Duke Spirit ripped through an efficient, power-packed 35-minute set. Singer Liela Moss, dressed like Grace Jones and moving like Tina Turner, manhandled a harmonica, a tambourine, and finally maracas, while belting out songs mostly quelled from their 2008 release, Neptune.

But this was Incubus’ party. And if you looked between the Marshall stacks stage right, written on one of the band’s cabinets in big white letters was the word “VERITAS.” While truths in music may depend on who’s listening, Incubus proved that even after years in the music biz, as long as you can still bring it live you really don’t have all that much else to worry about.

Scott Mcdonald
Tags: incubus, the duke spirit, We Were There