The hirsute Brooklynite announces details for his fall release. Click here for more! 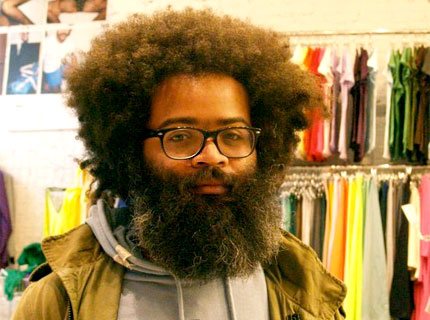 TV on the Radio singer-guitarist Kyp Malone has revealed plans to release a solo album this fall under the moniker Rain Machine. But that’s not all — he’s also taken the opportunity to come clean about all sorts of surprising stuff, including his aesthetic aversion to his own name and his amenability toward “LOL”!

“I’ve been writing and recording songs alone since I moved to NYC in 2000, at first alone because I didn’t know anyone, then through the years by choice because of a particular freedom that going it alone afforded,” Malone said in a statement on his record label Anti’s website.

He then went on to explain the origin of his project’s name: “I’ve played regularly since then, at first under the name Black Lights until some kids in Texas told me they were already using that name. Then under my own name but I didn’t like how ‘Kyp Malone’ looked on mock ups of t-shirts and fliers, thus Rain Machine.”

Producer Ian Brennan (who has also worked with Lucinda Williams) is putting his touch on the album, which Malone describes as a “full spectrum of frequencies audible to the human ear — a reflection of a variety of emotions and situations real and imagined, some rhythm and some rhyme.”

It’s not exactly clear what that means, but it seems a safe bet that this Rain Machine won’t sound like the Hammacher Schlemmer ones you buy to help you get to sleep.

Malone also promised that buying his forthcoming record would be “more than just pleasurable, more than just horizon expanding” and would “bring the listener to a higher level of consciousness.” Heavy. But he also revealed his unpretentious jokester side: “LOL!!! Really though, I had a great time making this record and I hope listeners enjoy it.”