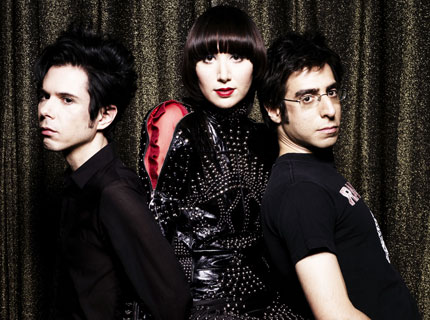 “Leaks are NO FUN,” the Yeah Yeah Yeahs wrote on their blog yesterday, addressing the recent internet leak of their new album, It’s Blitz. Of course, we agree with SPIN’s March cover stars. But, hey, if it means hearing their record sooner than anticipated — initially due April 14, it will now arrive digitally March 10 and on CD March 31 — we might have to begrudgingly admit that it does sound a little fun for fans.

“The cat’s out of the bag after It’s Blitz! escaped from our clutches into the big bad world last week,” the band wrote. “Why should some have and some have-not?”

That’s the kind of Robin Hood-inspired logic we can get behind.

The band confided that the tumult led them to seek guidance from an enlightened source within the band, drummer Brian Chase: “Can’t help but ask ourselves, ‘What would the PHILOSOPHER do in times such as these?'” the post read, before introducing a video clip (watch below) featuring said role model. “We now present PART II of the SNAKESWEAT TRILOGY, Mr. Brian Chase soothing our troubled souls in THE PHILOSOPHER.”