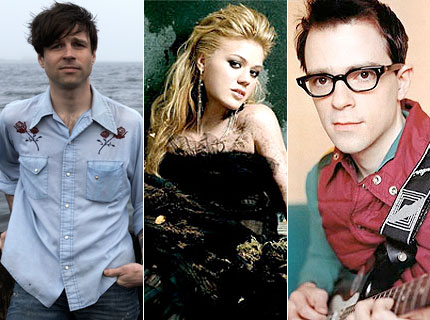 Valentine’s Day is nine days away, but a few musicians already have love on the brain. Between the poetry, mixtapes, love songs, and lesbian fantasies (yes lesbian fantasies!) we’ve heard about this week, you’d think every day was February 14.

Ryan Adams: Sure, he declared his intention to quit music last month, but for Ryan Adams there’s clearly no “quit” in “mixtape.” The prolific (even in retirement) singer-songwriter will put out a collection of his favorite love songs titled The Ryan Adams Valentine’s Day EP February 10 via iTunes. The EP will also include the unreleased bonus track “Hey There, Mrs. Lovely.” [via Stereogum.com]

Kelly Clarkson: Is there anyone who doesn’t love Kelly? Apparently the pop star has more than a few interested lady callers who inquire whether she’s secretly a lesbian. This week she went on record to say that, while she thinks it might be nice, she’ll pass. “I wished I liked women like that because often times, men are very hard for me, but I happen to like boys.” We’ll refrain from any jokes about the “men are very hard for me” part of that quote, but it won’t be easy. [via popeater.com]

Rivers Cuomo: Everyone knows poetry is romantic. Everyone, perhaps, except for Rivers Cuomo. The typically off-kilter Cuomo read his poem “By The Side of The Road” for Daytrotter this week, and we’re guessing all of those Into The Wild groupies who go crazy for whispered mentions of worms and licking bark are totally going to swoon — especially to Cuomo’s verse about vomiting and then putting his face in it to bring himself closer to nature