Watch the British beauty lose her marbles in the new clip from British duo the Hours. 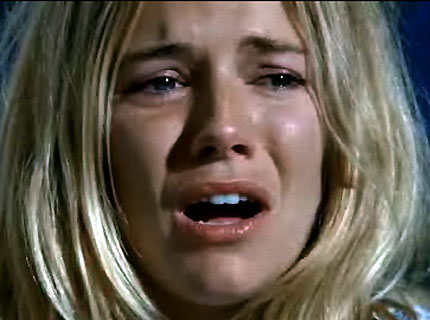 Sienna Miller does damsel in (complete mental) distress and Damien Hirst does stuff with cows’ blood: So basically it’s business as usual on the set of the new music video for the Hours’ track, “See the Light.”

The UK duo — Antony Genn and Martin Slattery, best known as two members of Joe Strummer’s band, the Mescaleros — premiered their new mini-movie on MySpace on Halloween, which is apropriate considering Miller’s insane-asylum hospital gown and the Carrie-esque blood on her hands She also cavorts with a few unlucky cows who’ve been pinned to the wall by the world’s highest-paid taxidermist, British artist Damien Hirst, who art-directed the video.

Miller’s character spends the entire time on a desperate, weepy rampage, but we never do find out exactly what’s caused her such distress. Not that that’ll keep us from rewatching the clip. Won’t you join us?

Watch! The Hours, “See the Light”: