Slash: “I Need a Break from Politics and Democracy”

The guitarist sounds off on his forthcoming solo album, the state of Velvet Revolver, and the pitfalls of bands. Click here for details! 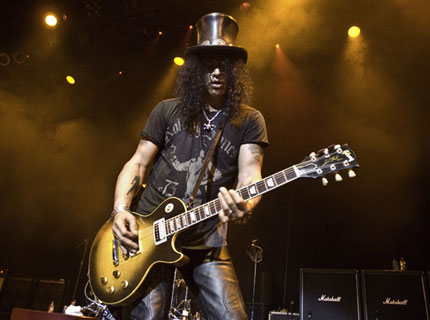 Former Guns N’ Roses and current Velvet Revolver axeman Slash is “at the very tail end of the demo phase'” for a solo project, which he could start recording in the studio early next year, Billboard.com reports.

“I just wanted to take a little bit of a break from all the politics and the democracy that is a band and just sort of do my own thing for a little bit,'” the guitarist said, adding that his album will reference both of the aforementioned bands and feature a slew of rock’n’roll’s household names on vocals — not that he’s naming them. “They’re all sort of well-known singers,” he said.

However, the solo project could be pushed back if Velvet Revolver finds a replacement for former singer Scott Weiland, who was ousted earlier this year. That replacement won’t, however, come in the form of a Rockstar-like televised search: “There’s such a huge lack of integrity in that process,” he said.

Slash is set to perform at the Rock and Roll Hall of Fame’s American Music Masters tribute to Les Paul on November 15 in Cleveland.

While you await the arrival of Slash’s solo set, check out a video interview with the rocker below!