Wait, is this a facial hair convention? The two blues-rock outfits unite with producer Rick Rubin in Los Angeles. Click for details! 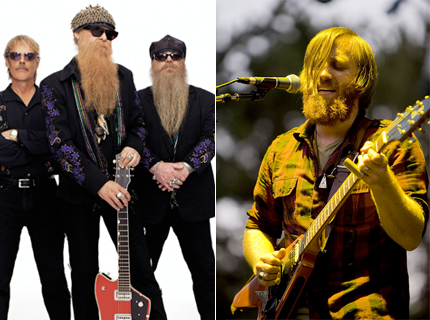 “I’m such a big fan of those guys … it makes total sense,” Gibbons said of the Black Keys, adding, “That’s pretty down and dirty, which is good for ZZ Top.”

ZZ Top is the latest in a string of iconic admirers for the Black Keys, who were recently fawned over by the Pretenders’ Chrissie Hynde and Devo at a Democratic party fundraiser in their hometown Akron, OH. “She knew who we were,” Black Keys frontman Dan Auerbach explained of Hynde. “Both she and [Devo’s] Mark [Mothersbaugh] were saying the nicest things, about how we made them feel proud of Akron again. It was a heartwarming experience.”

The Black Keys will release a concert DVD, entitled Live at the Crystal Ballroom, on November 18 with three extra music videos plus footage of the Keys recording their latest album, Attack & Release, with Danger Mouse.