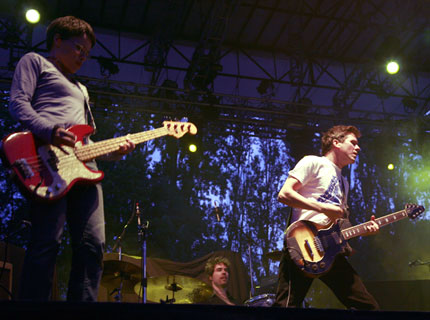 But despite the not-so-thick crowd, frontman Mac McCaughan and crew’s tangled indie-pop hooked many a fervent, fist pumping, and — at times — moshing 30-something clad in weathered rock tees. Even Death Cab guitarist Chris Walla, perched on the side of the stage, exhausted more energy bouncing up and down in glee than strumming alongside Ben Gibbard later that night. Plus, comedian Janeane Garofalo was seen running backstage, coffee in hand, to watch the band with her own two eyes. Call it ’90s nostalgia, but who wants to argue with the same decade that spawned grunge, Beavis and Butthead, the DIY movement, slacker sarcasm, and so many other entities responsible for the sounds of today? Not me.

Watch Superchunk rip through classics like the fuzzy pop-smart “Throwing Things,” off 1991’s No Pocky for Kitty, and “The First Part,” a heavy rocker from 1993’s Foolish, and be sure to check back to SPIN.com all week for more from Bumbershoot ’08.