Frontgirl Hayley Williams addresses rumors claiming the band will contribute to the upcoming movie adaptation of the teen vampire novels. 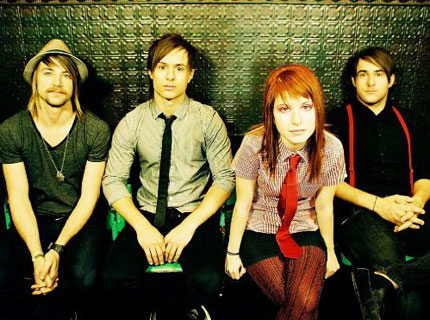 After weeks of speculation that pop-punk outfit Paramore will contribute new songs to the upcoming film adaptation of teen book series Twilight, spitfire singer Hayley Williams has finally cleared the air, calling the rumors, “a little less than true but a little more than a lie” in a blog post before confirming the band is, in fact, “recording again for a possible shot” at inclusion in the forthcoming movie.

Williams says the crew is holed up at Blackbird Studio in the their hometown of Nashville working on the material — “if you can even consider this work,” writes Williams — after spending a year and half on the road supporting their last full-length, Riot!. But aside from the new tracks, what’s Williams most excited about? Simple: The VMAs. “Being there was a trip,” Williams writes. “I even congratulated Britney face to face! I was so stoked!”

UPDATE: Even more details about Paramore’s contributions to the soundtrack >>