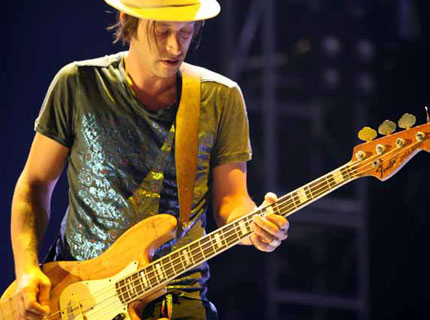 Since the Verve officially split in 1999, the band’s — and not just frontman Richard Ashcroft’s — Shaman-like, transcendent qualities have been noticeably absent from the contemporary rock scene. And while “Love Is Noise,” the first leak from the psyched-out Brit quartet’s forthcoming reunion disc Forth showed a nu-rave-tinged sonic, “Noise Epic” returns to the Verve to their, well, epic and mind-boggling guitar-centric sound.

“The great thing about ‘Noise Epic’ is how organic and spontaneous the recording was,” bassist Simon Jones tells SPIN.com. “It was one of those magic moments when everything comes together all at once.”

Indeed: With a beautiful chaos of screeching guitars, thudding bass, and fluxing background fuzz riding alongside Ashcroft’s inter-mingling, talk-speak reveries, “Noise Epic” is an apt title, but the blissful clamor is just the tip of the iceberg. “I got spirit / You got it in for you, I got in for me / I got spirit / Wake up / Wake up / Wake up!” Ashcroft busts during the song’s closing implosion, sliding into his characteristic religious role as the band set ablaze the altar behind him.

“The first two sections were edited together from a 45-minute jam and it just kinda revealed itself during the editing process,” Jones said of the tune’s birth. “The end section was from another jam on another day and Nick had a clear vision of how the jigsaw should fit. This is what the Verve is all about — capturing those magic moments and then creating something special.”

The Verve: Mad for It