Atlanta's princes of atmosphere return with Microcastle and an opening slot for Trent Reznor and co. 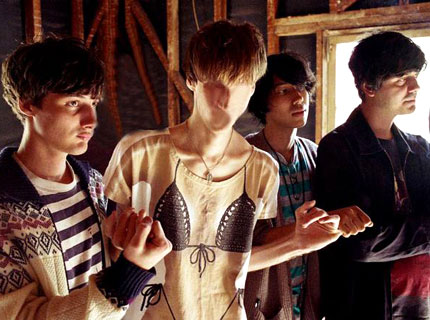 Georgia punk peaches Deerhunter have announced the details of their much anticipated follow-up to 2007’s lauded fuzz-fest Cryptograms. The album, dubbed Microcastle and slated for release on Oct. 28, comes less than one year after Bradford Cox and his cohorts announced an indefinite hiatus after two years of touring behind Cryptograms.

In the interim we heard from frontman Cox via his hyper-personal solo outlet Atlas Sound and even saw the boys open for the Smashing Pumpkins on a few dates this summer.

Now, the down-South kids are packing up for a cross-country jaunt with Corgan’s ’90s alt-rock contemporaries Nine Inch Nails in a coveted supporting slot ideal for promoting the new disc, which was recorded over only one week at Rare Book Studios in New York.