Deerhunter frontman gets noisy and blissed-out. 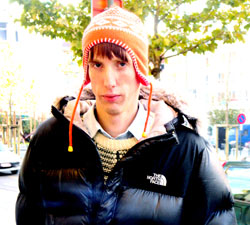 Who? Named after the tape machine he’s been recording onsince sixth grade, Atlas Sound is the side project and recording aliasof Deerhunter frontman Bradford Cox. Although his main band touredalmost non-stop throughout 2007, workaholic Cox somehow found time toget in a recording studio and lay down the tracks that make up hisforthcoming debut, Let the Blind Lead Those Who Can See But Cannot Feel, out Feb. 19 via the Kranky label.

What’s The Deal? A more electronic-oriented project than Deerhunter, Let the Blind Leadis a swirling ambient journey through Cox’s mind, as well as his recordcollection. The massive distorted guitar chords and delay-treatedvocals in “Recent Bedroom” are immediately reminiscent of Loveless-eraMy Bloody Valentine; elsewhere, thumping bass and twinkling bellscreate a Björk-esque soundscape on “Quarantined.” One would refer toAtlas Sound’s music as shoegaze — that is, if Cox wasn’t so intent oncausing the listener to gaze straight ahead instead of looking down, asevidenced in the disorienting static stutters and acoustic strums in”Ready Set Glow.”

Fun Fact As a little kid,Bradford Cox was kicked out of the Boy Scouts of America. He was askedto leave by the hut master because he, as Cox tells SPIN.com, “wasn’tlike the other boys.”

On the Web:
Atlas Sound at MySpace
deerhuntertheband.blogspot.com