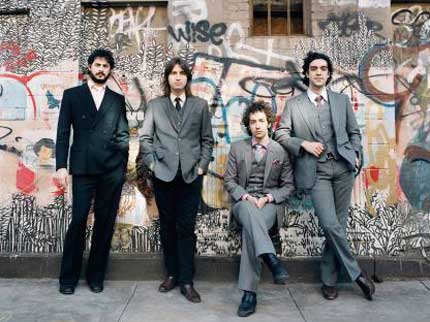 What? With the Strokes on an unofficial hiatus, ragamuffin rhythm guitarist Albert Hammond Jr. has turned efforts inward, developing into quite the self-determined songwriter. And less than a year after the U.S. release of his debut solo set, Yours to Keep, Hammond returns with Como Te Llama?, his sophomore outing, due July 8 via RCA / Black Seal.

Though foraying into Strokes territory (including the crunch of “The Boss Americana” and the intertwining guitar parts of “In My Room”), Llama tenders a fresh diversity, from the ethereal instrumental “Spooky Couch” to the Breeders-meets-Robert Pollard static hum of “Rocket.”

Fun Fact: As if recording his second solo album wasn’t enough, Hammond Jr. also found time for his first-ever venture into the production realm, twiddling knobs on up-and-coming NYC rockers the Postelles’ “123 Stop.”Watch video of the quartet at Bonnaroo ’08 performing an acoustic rendition of the song exclusively for SPIN.com.