Banshee Karen O and crew channel kitten love in follow up to 2006's Show Your Bones, and present a perplexing riddle -- can you decipher the band's secret code? 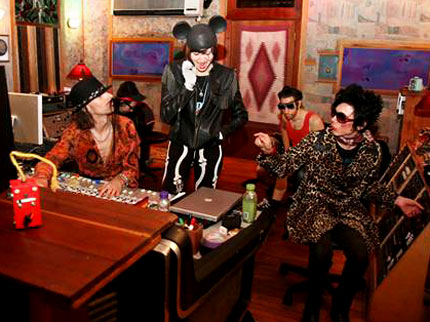 It “smells like record three” for the Yeah Yeah Yeahs, who have retreated from their metropolitan abodes to the countryside to record the follow up to 2006’s Show Your Bones. Why? Well, leave it to the trio to shed a little light: “Yeah Yeah Yeahs have been hopscotching down the road less traveled — from a barn in the Northeast to a ranch in the Southwest on our journey for the next sound. Why go RURAL? We’re not yet sure ourselves, but one thing the city don’t [sic] have that the country got [sic] is SPACE and there has been plenty of spacing out in the studio as of late.”

And though the band remains mum on the new tunes’ sound, one thing remains constant — its influence. “Fuzzy soft muses a.k.a. kittens have played a major role in the writing process of YYYs current and past records. Show Your Bones was written in Sam Spiegel’s home studio amidst the birth of a litter of kittens, little gold lions scrambling around. Amazingly therapeutic, nothing turns a frown upside down (there are many frowns in the record [and] writing process) as a purring kitten in your lap. Alas our favorite kitten of all beloved SQUEAKER arrived just in time for record three! Abandoned by his mother, we’ve watched him grow before our very eyes from a blind and helpless little thing into a frisky and fierce little beauty — much like the tunes we’re writing. Go figure.”

As a send off, the merry pranksters of the YYYs leave us with a picture riddle. See below: The aforementioned Southwest ranch, plus a kitten perched on a mixing board, equals a black dice with three dots on each side. Hmmm…

Can you decipher the YYYs’ secret code? Leave your thoughts in the comments section below.