Le Tigre Roars Back for First Tour Since 2005

On the heels of a one-off 2022 reunion at the This Ain’t No Picnic Festival, Le Tigre will embark on its first tour since 2005 later this year. The trio of Bikini Kill frontwoman Kathleen Hanna, JD Samson, and Johanna Fateman will return to the road beginning on May 27 in Philadelphia and has dates booked through July 28 in Brooklyn, N.Y. Le Tigre will also play three European dates at part of the Primavera Sound festival this summer.

For its first seven years as a band, Le Tigre was the most ferocious and infectious dance party around, singing of feminist and queer identity with riot grrrl chants and a raw pop sensibility. In 2005, the group went into hibernation after three albums, but there were a handful of brief reunions throughout the years, including a Yoko Ono cover in 2007, a 2015 Pussy Riot collaboration, and 2016 single, “I’m With Her,” released in support of Hillary Clinton’s presidential campaign. Fateman’s 13-year-old daughter kept them in the loop on the TikTok generation, as teenagers began attaching clips of frustration and hope to the thumping basslines and Casio keyboard hooks of 1999’s “Deceptacon” and other tunes.

“JD and I collaborated on songwriting things. There was never bad blood between us,” Fateman told SPIN last year. “We love each other. But Le Tigre is sort of a funny organism. For us, it’s as much art and political activism as it is music. It thrives under the right conditions.”

According to Samson, the original plan was to play This Ain’t No Picnic in 2020, “and we felt that it was really important for us to reunite prior to the 2020 election. We felt the relevance of our music would really stir up something important within our community. And obviously, that was canceled because of COVID. We just continued to want to present the material again.” 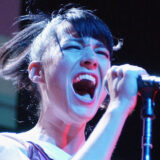 “We went in really different directions after we stopped playing shows in 2005,” Fateman said. “JD has become a professor [at New York University]. I’m an art critic [for the New Yorker and Artforum]. Kathleen has done various nonprofit work, and then she did the Julie Ruin and then Bikini Kill reunited. We had more than a decade to just be individuals again, and then come back together, bringing more to the project.”

Tickets for the reunion shows go on sale Friday (Jan. 27).