Ben Gibbard is going to be one busy man come next September, when he performs both with Death Cab for Cutie and his reunited, electronic-leaning side project the Postal Service as part of a co-headlining U.S. tour. Each night, the groups will play their respective, beloved 2003 releases Transatlanticism and Give Up in their entirety, with dates beginning Sept. 8 in Portland, Me.

“These two records will be on my tombstone, and I’m totally fine with that,” Gibbard says of Transatlanticism and Give Up, which were released eight months apart and both turn 20 next year. “I’ve never had a more creatively inspired year.” Tickets for the tour go on pre-sale on Dec. 14, with the general public on-sale to follow two days later. Click here for more information.

The Postal Service, which also includes Jenny Lewis and Jimmy Tamborello, played close to 40 shows around the release of the left-field hit Give Up, but then disappeared until a 2013 reunion tour. Give Up is certified platinum for U.S. shipments of more than one million copies by the Recording Industry Association of America and is Sub Pop’s second-best-selling album of all time, trailing only Nirvana’s Bleach.

The 2013 reunion was chronicled in the subsequent year’s concert documentary Everything Will Change and a live companion album of the same name, which was released digitally in 2020.

As for Death Cab, the group will be touring in support of its recently released 10th studio album, Asphalt Meadows. It spawned the band’s biggest radio single in many years, “Here to Forever,” which reached No. 1 on both Billboard‘s Alternative and Adult Alternative Airplay charts. 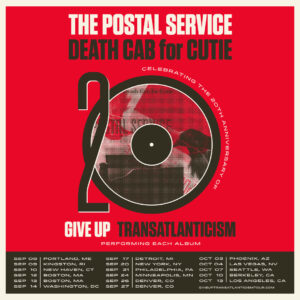 Before the Postal Service dates, Death Cab has its own headlining tour on tap, beginning Jan. 27 in Louisville, Ky., and running until June 17 in Bend, Ore.

Death Cab for Cutie and the Postal Service’s 2023 tour dates: