How Pinkshift’s Passion and Dedication Shaped Love Me Forever

A lot has changed for Pinkshift in two years.

The punk trio, which formed in 2018 while studying at Johns Hopkins University in Baltimore, went viral in 2020 with their single “I’m Gonna Tell My Therapist on You.” A year later, they self-released their debut EP, Saccharine, and signed to Hopeless Records.

With their music career taking off, guitarist Paul Vallejo decided to put his career in chemical engineering on hold. Bandleader Ashrita Kumar also opted to not pursue their previous path of becoming a neurosurgeon. And ahead of last year’s tour with Mannequin Pussy, drummer Myron Houngbedji declined their acceptance to medical school.

“I don’t regret it at all,” Houngbedji says via Zoom from his living room. “I know if I did go to med school, I would regret that 10 times more than anything that’s happening right now.” 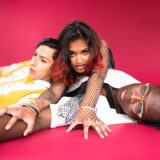 Pinkshift Previews Debut LP With Piano-Heavy ‘In a Breath’

While Saccharine was a pop-punk ripper, Love Me Forever incorporates varied influences, particularly leaning more toward grunge. These touches — inspired by bands like Nirvana and Soundgarden — weren’t intentional, but seeped through after Kumar took up the guitar.

“I never played guitar before Saccharine, but [since] I picked up a guitar, my influence comes out a little bit more than just melodically,” Kumar says. “It comes out in some of the chords for some of the songs too, because there are some songs where I started off [with] an idea on guitar. So whenever I start with an idea, it just sounds like a Nirvana song — and then Paul [Vallejo] has to fix it.”

Much of the album is bold, with Kumar matching their brash vocals with lyrics about processing the trauma and pain they’ve experienced throughout the years and the fear of letting their guard down. But the most vulnerable track is actually the softest, with “In a Breath.”

This song has been with Kumar since before forming Pinkshift. They recall that before meeting Vallejo, the only songs they’d written were piano ballads. Kumar had no intention of ever releasing the old tracks, but “In a Breath” — which is about dealing with PTSD from an emotionally abusive relationship — stuck with them. It was a track they’d revisit to cope whenever they needed comfort. Kumar ultimately decided to bring it to their bandmates for Love Me Forever.

“I think releasing ‘In a Breath’ specifically was very difficult for me in that sense, where I felt really exposed,” they said. “It’s a lot easier when I have my friends with me. With the other songs, I feel like it’s easier for me to actually say how I feel because I have Paul and Myron right behind me and we’re all writing this song together. So it kind of feels like it isn’t just my feelings. And then when you introduce it to a room full of people, it’s like we can all take part in this and relate to it to some extent, which feels good and really validating and healing because a lot of the album is [about] pain.”

Being able to perform means a lot to the band, who are currently on their first headlining tour. Houngbedji is thrilled to show off his custom drum kit, with colors that match Love Me Forever‘s art. He shows some of the pieces to the camera over Zoom, with the heartwarming smile of a child showing off his birthday present. “I’m so excited, it’s so pretty,” he gushes.

Aside from the new paint, Houngbedji also notes that he incorporated different techniques and fills on Love Me Forever. By taking influence from the 808 drum machine pattern in hip-hop and heavy drumming from hardcore, he brought the band’s sound into new territory. Beyond the new inspirations, Pinkshift also sought to improve their live shows by recording their performances with a GoPro each night while opening for Mannequin Pussy.

“After the show, we’d drive to wherever we were staying and then we’d put the video on the TV,” Kumar says. “It would be like 3 a.m. and we’d watch our set and we’d be like, ‘Alright, cool. Was that a good idea? Let’s do something else.’ We did a lot of self-critiquing. With every show, we’re just constantly trying to grow.”

Besides the immense attention to detail in their performances, the band has made sure that everything feels collaborative and comfortable these days. After parting ways with bassist Erich Weinroth — the only member who wasn’t part of the original trio in 2018 — shortly after the release of Saccharine, they’ve built a solid foundation that isn’t easy to find in a band. That immense chemistry may just be the secret to Pinkshift’s success.

“I’m proud of the dynamic that we’ve built in terms of how we work together and how we try to reach a common goal,” Vallejo says. “You always form a band with your best friends, but just because you’re best friends, that doesn’t necessarily mean there’s always going to be respect, or that everything’s fine. Even among close friendships, there’s always room for tension. But I think me, Ashrita, and Myron work really hard to create a space where all of us feel really comfortable and safe, and we all encourage each other.”