When I asked Dropkick Murphys’ Ken Casey to think of the craziest thing that’s ever happened while on tour, he says that most of those stories go way back, to “the days back in the van,” like that time back in the early 2000s, during a snowstorm in North Carolina. “There was a crazy amount of snow during the show and the streets were shut down,” he tells me. “The streetlights were out, just blinking red. Us and the opening band from Boston that we had with us, Tommy and the Terrors, were the only two vehicles on the road in Chapel Hill. We were coming through an intersection and they were coming the other way. We had a two-car accident where we were the only two cars on the road. We smashed into each other and crashed. That was pretty funny.”

I caught up with Ken on tour on a “fucking freezing” November day in Reno to talk about more “funny” hi jinx on the road. 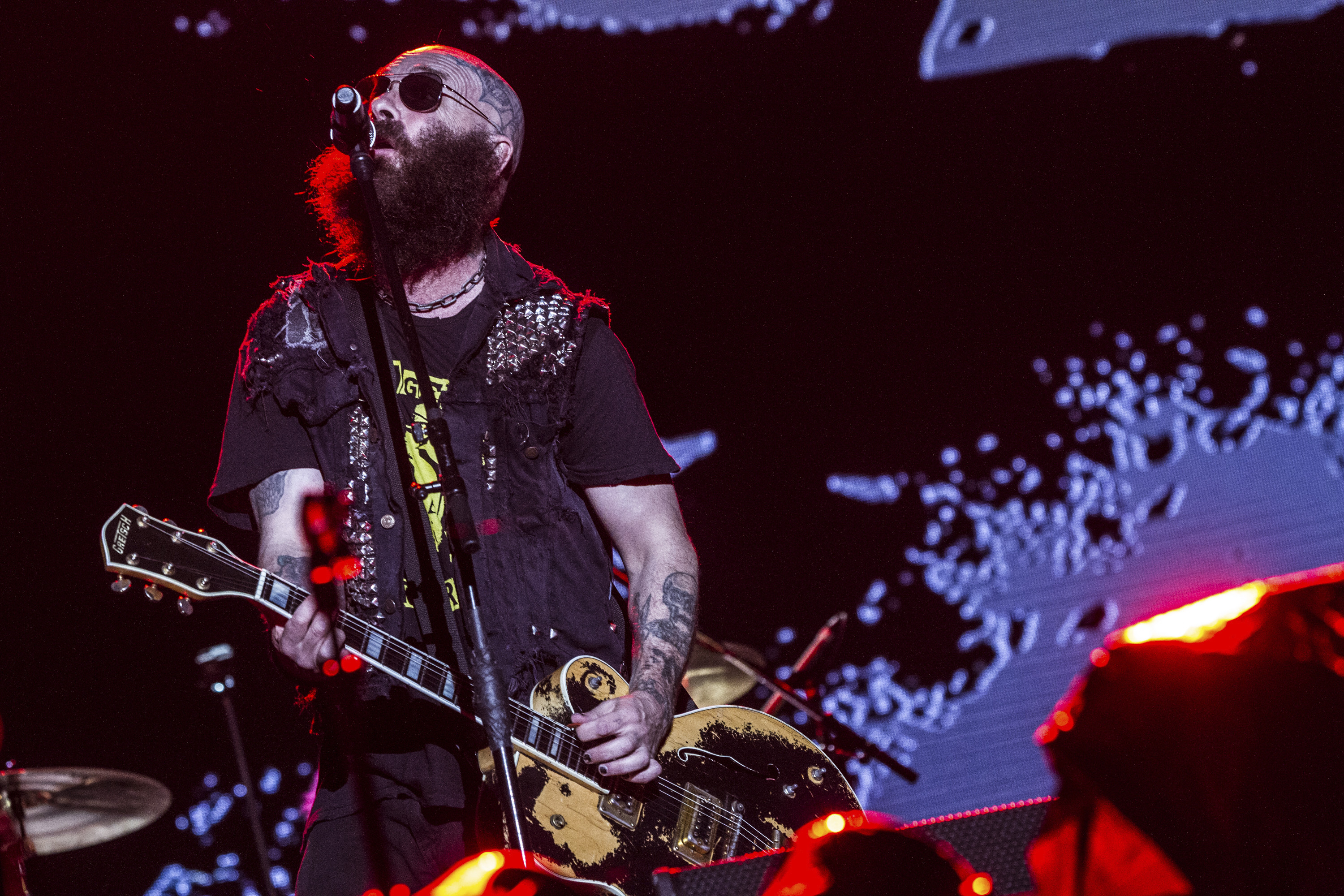 Around 2000, 2001, we were playing a festival in Finland, which was crazy enough to get to. I remember having to dash through airports and everything to make it there… It was our first time in Finland and the festival was way, way out in the middle of nowhere. I think we flew to Helsinki, then took a plane to a small airport and then a bus, not like a tour bus but a coach bus, had to take us a couple of hours’ drive out to the location.

As we were coming back from the festival in the middle of the night, the bus driver said, “You know, the Russian border is only through the woods here.” We immediately, of course, said, “Pull over! We’re going to Russia.” Out came the flashlights and we started walking through the woods. Some people were not in the best state at that hour of the night. I was, but I was trying to lead this pack of miscreants…and we come across the No Man’s Land sign where it’s a big, huge red hand painted and it says in all these different languages: “You’re Now Entering No Man’s Land.” The little bumper territory between the borders where it’s basically warning you that you’re coming close to the border. We read that and it said, “Stop. Do Not Enter. No Man’s Land”…blah blah blah…and, of course, we said, “Let’s go.”

We crossed the Russian border and we’re all jumping up and down, singing, “We’re in Russia,” and dancing around. All of a sudden, the pitch-black sky lights up because a flare gets shot. When the flare gets shot and the sky’s lit up, we realize we were literally like 50 yards from a Russian guard tower.

We’re lucky we all didn’t get shot. In the ensuing sprint to get out of there, there was a little river you had to cross and half of us ended up face-planted in the river. There’s actually a video of it on YouTube somewhere because it was on this DVD we put out. We ended up making it out of there but, man, the going from laughing and singing and dancing to how quickly it changed when we realized we were right under a Russian guard tower.

That was a pretty wild story. Just a bunch of guys from Boston who didn’t really leave [Massachusetts Route] 128 much getting into Russia.

We just had a pretty hilarious thing with our drummer, Matt. In the festivals in Europe they build dressing rooms out of shipping containers. He was in the shower in one and he got locked in and literally couldn’t get out. They tried to take the hinges off. They tried to take the door handle off, couldn’t get out. They ended up having to bring the jaws of life type of thing out and literally cut open the side of the container truck so he could get out to get on. We were literally like we might not be able to play in the show because a guy’s stuck in the bathroom.

Murphy’s law…if it can go wrong it will.

We’ve all had crazy wipeouts on stage. When someone goes down on stage, you feel bad for them and you want to help them, but you have to just ignore it because if you react to the guy who went down, then it’s just drawing more attention to it, so you got to leave that soldier behind and you just play on and pretend nothing happened. We’ve all had some devastating wipeouts on stage.

One time I was waiting for the first song to start and they pulled the reveal in front of the drums and I was jumping up and down and as they dragged the reveal away, it wafted under my feet and I landed on the reveal and they were dragging it away. I landed and then they basically essentially yanked my legs out from under me. When you haven’t hit the first note yet and you’ve had a massive wipeout…it’s tough. And you know you got an hour and a half more to go. Tough to recover from that.

My bandmates had to just leave me there lying on the floor to fend for myself, because if they come over and say, “You all right?” then everyone’s looking at you, so you just have to let the moment pass as quick as possible.

Another time, it was my first time I hadn’t hit a note yet, Tim, our now lead guitar player, at the time he was still our utility player playing banjo and everything, and actually this was in Finland as well. James had to go home because his grandmother passed away. Tim replaced him. We just had to not have the banjos and stuff. Tim was playing rhythm guitar.

James would go out first and I would run out right behind him. James has whatever, size 10 shoes and I would run right in front of him and then now James is gone and Tim’s replacing him and Tim has like a size 15 sneaker and just that difference of a few inches and I ran by where I would normally run by, but I caught the tip of Tim’s frigging Chuck Taylors or whatever, and once again, sailing through the air.

So, I’ve had three instances where I ate shit before I even hit the first note. Having a little PTSD right now…

It just happened on this tour. You cannot be in a band for 26 years and not have that happen. We’ve had those 24-hour bugs and stuff, but I had basically a 48-hour bug when we played the Brooklyn show of this tour. I was projectile vomiting in a barrel before and after the show and on several occasions during the show. I had already thrown up any ounce of solid food in my body, but just projectile vomiting water and it was horrific. I got through the show and the show must go on.

I had another time in Europe, probably 10 years ago, where I had the flu so bad for a week that I would just stay in my stage clothes. I would go on stage, play the show, throwing up on stage in a bucket, come out all sweaty, everything, no energy, climb right into my bunk, sleep all 24, like literally sleep until our tour manager would be like, “You got to go on again,” and I’d get out in the same clothes, go right on stage, do the same thing and right back to bed.

It was just horrific. You don’t want to be in the middle of nowhere, whatever, in Europe and being over there and just canceling shows because you’re sick. Every single guy in the band’s had to do that.

There is an adrenaline factor I think that goes to it where I’ve felt like I was literally going to die and then you’re still sick on stage but there’s something about the adrenaline that gets you through it. I also got an inner-ear infection and got vertigo and played three weeks on tour on vertigo. We couldn’t even have lights on, like moving lights because it would make me start throwing up and played those shows, too.

Those are not pleasant memories. I will say, there’s something about you feeling sick as sick can be, but for the hour and a half you’re doing it, it’s somehow a little less just because it must be adrenaline and/or that feeling of just like, “I got to get through this.” Your mind makes you find a way to get through it.

That Brooklyn show I came off, I had to lay towels down, but literally came off stage and just laid on the bathroom floor. That kind of sick where you know you’re going to have to throw up, so you’re just laying on the bathroom floor. That’s a brutal feeling. How did I just play a show and now I can’t even lie on the couch knowing I’m going to have to get up and walk five feet to the bathroom?He’s [“Unnamed”] not in the band anymore…but back in the old days, the first time we went to Australia in ’99, this might have been more of a food poisoning, but he was behind his amp sitting on a five-gallon bucket, using it as a bathroom. He didn’t have a big stack of amp, he just had one martial cabinet. You could see his head over the amp. I was like, “Oh man.” [Laughs.]

The band kicks off their 2023 tour in Belfast. Find your city and purchase tickets here.