Patrick Haggerty, the singer of country music group Lavender Country, has died at the age of 78. According to a statement posted on the band’s social media accounts, Haggerty died today (Oct. 31) after suffering a stroke a few weeks ago. The statement added that the singer was able to spend his final days at his home and was surrounded by his husband, JB, and his children.

Born in 1944 in Washington, Haggerty is widely acknowledged as the first openly gay country singer. Before his music career, Haggerty enlisted in the Peace Corps after graduating from college in 1966. However, he was kicked out due to his sexual orientation.

After moving to Seattle in the early 1970s, the lifelong Hank Williams and Tex Ritter fan formed Lavender Country by recruiting friends from the Seattle area. On the band’s self-titled 1973 debut, his lyrics reflected his experiences as a queer man at a time when such sentiments were rarely heard in mainstream music.

Lavender Country broke up in 1976 but surprisingly reunited in 2014 when the Paradise of Bachelors label reissued the debut album. The group self-released Blackberry Rose and Other Songs and Sorrows in 2019, which saw wider distribution earlier this year thanks to Don Giovanni Records. 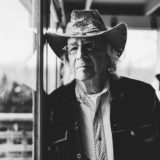 Can’t Shake the Stranger Out of Lavender Country

“Patrick Haggerty was one of the funniest, kindest, bravest, and smartest people I ever met,” Don Giovanni Records said in a statement. “He never gave up fighting for what he believed in, and those around him who he loved and took care of will continue that fight. RIP Patrick (1944-2022).”

Earlier this year, around the time of the Don Giovanni reissue, SPIN spoke with Haggerty about his career. “People always ask me why I chose country music,” he said. “The truth is, there wasn’t any genre in 1973 that was ready to embrace a queer Marxist!” He added, “When I made Lavender Country, I could barely play guitar. I’m the original three chords and the truth guy.”

Outside of music, Haggerty was involved in politics in Seattle, running for city council twice. He was also involved with ACT UP, an AIDS justice organization.