On the occasion of his 30th birthday today (Oct. 3), Grammy-winning musician, singer, and songwriter Billy Strings has announced the release of his debut album co-written and co-produced with his father, Terry Barber. Me/And/Dad arrives on Nov. 18 via Rounder Records. The album comprises new renditions of 14 bluegrass and country songs that Strings and his father have been playing together since Strings was a child.

Two of the covers, released below, are the bluegrass classic “Long Journey Home” (with the video directed Roger Pistole and Scott Mele) and George Jones’ “Life To Go.”

After finishing the album, Strings reflected on the experience, saying, “As long as I can remember, I wanted to make a record with my dad. I’ve been burning up and down the highways the last 12 years, and as time slips away, you start thinking, ‘I need to make time.’ It’s been a bucket list thing for me, something I’ve been afraid I wouldn’t find the time to do. And that scared me; not doing this record scared me.”

Renewal, Strings’ previous album, received widespread acclaim and was one of the top 50 most played albums on Americana radio in 2020. In the years following his 2017 debut, the Michigan-born, Nashville-based musician has won multiple awards and accolades, including Best Bluegrass Album at the 63rd Grammy Awards and Artist of the Year at the 2022 Americana Music Awards. 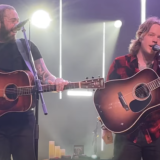