Not the new Alvvays album, but the booze for which it’s named, because this is some deeply, deliciously Canadian shit. The niche nostalgia play is fitting for a Toronto band largely defined by backward glances: to past loves and the jangly post-punk of C-86 bands like Primal Scream and the Wolfhounds.

Anyway, Blue Rev is the forefather to our infamous Four Loko — a trashy, plastic bottle “alcopop” energy drink that looks like antifreeze, tastes like blue slushie (or freezie in Canada) and blew up around 2000 in Ontario, when and where it was released, mainly with club kids. It’s also exactly the sort of sugary garbage that teens would sneak behind a mall or roller rink, grabbing a quick buzz in between hating everyone and everything.

Such is the essence of Blue Rev, Alvvays’ long-awaited third LP. It’s at once fizzy, fun, pissed off, urgent, longing — not unlike a bored 16-year-old on a Saturday afternoon. 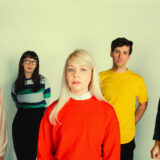 Five years between albums was never the plan for the quintet, who landed a nearly infallible indie-pop gem with their self-titled debut in 2014 and won a coveted Juno Award (think Canadian Grammys) for their louder, darker and more adventurous follow-up, 2017’s Antisocialites.

Someone broke into singer Molly Rankin’s apartment and stole a bunch of demos, which were never recovered. A day later, a basement flood nearly destroyed all the band’s equipment. Alvvays underwent a substantive lineup change too, swapping bassist Brian Murphy and drummer Phil MacIsaac for Abbey Blackwell and Sheridan Riley, with whom Rankin, guitarist Alec O’Hanley and keyboardist Kerri MacLellan couldn’t rehearse due to pandemic border closures.

However, Blue Rev was worth the wait — a boisterous pack of indie-rock winners, instantly lovable from the double-fried guitar crash of “Pharmacist,” the galvanizing opener and lead single.

As the band worked with well-traveled producer (and fellow Canadian) Shawn Everett (The Killers, The War on Drugs, Kacey Musgraves) for the first time, the album finds a sweet spot between lo-fi crunch and big-studio polish. Unlike their other records, all of Blue Rev was played straight to tape, a gleefully imperfect human touch felt throughout — especially on Rankin’s vocals, which may have once been described as measured coos but have evolved into full-throated wails of exasperation and catharsis (you decide which is which).

Across 14 tracks, there is no obvious hit to match the enduring success of 2014’s “Archie, Marry Me” or 2017’s “Dreams Tonite,” each touting a cool 70 million listens on Spotify — massive numbers for a band that began in the outlands of Nova Scotia and Prince Edward Island. But each song has its place and raison d’etre amid this fully realized batch of tunes detailing heartache, lonesome fury and wistful wonderment.

“Why would I ever fall in love again when every detail is over the guardrail?” Rankin asks in “After the Earthquake,” a blistering, New-Wavey jam that goes quiet midway through, pulling out all tempo and fervor to mimic the numbness of a chasm left in love’s wake. The clean guitar tone before and after this moment, now O’Hanley’s calling card, is wonderfully bright and textured.

Break-up songs that peppered Antisocialites continue with “Easy On Your Own?,” which drags along some of the shoegaze-light of “Pharmacist” as Rankin howls: “I waited so long for you, wasted some of the best years of my life.” Here the emboldened singer also considers what may be the record’s true thesis: “how I gauge whether this is stasis or change.”

The latter feels more true on “Pomeranian Spinster,” a high-speed, fuck-you sequel to 2017’s “Plimsoll Punks” channeling some Television vibes — fitting, as an earlier track on the album is named “Tom Verlaine,” for the vaunted frontman. On “Pomeranian,” Rankin sneers before an incendiary guitar finish, surging beyond lost romance: “I don’t wanna belong; I’m not nodding along / Don’t care if I’m wrong; you unfortunate boy, you’ve gone AWOL.”

The record is markedly more rock than where Alvvays began, with their jaunty tributes to Yo La Tengo noise-pop, though the playful “Very Online Guy” does employ thick layers of static and distortion in its takedowns of performative social media bros: “He’s only one follow, one filter away.” The hooky new jam “Belinda Says” might be the closest thing to an over-the-plate pop chorus, though it too is scuffed up by heavy guitar fuzz.

In totality, Blue Rev is the work of a band that’s moved beyond somewhat standard beachy-dream melancholia to touting heaps of creative currency and more to say. The progression to grander guitars and more ambitious arrangements, like the sweeping string-laden outro of closer “Fourth Figure,” feels natural and welcome. And while the sound still owes plenty to its ‘80s predecessors, there’s a singularity to Alvvays’ hypnotic, heart-strung-out equation, where mournful memories rage against what happens next.

Though this time, for the first time, Rankin seems firmly prepared for the future, as she declares triumphantly on “Bored in Bristol”: “(I’m) getting on the last train, and no one can stop me.”