Rammstein is a band committed to blunt force. You could hear it and feel it on the final night of the German act’s long-delayed U.S. stadium tour, erupting at the Los Angeles Memorial Coliseum on Saturday (Sept. 24) with the heaviest guitars and industrial beats, abrasive electronics and literal fireballs. Rammstein meant to leave a mark and they did, with thousands of fans pummeled into noisy ecstasy and a sky tinged with smoke and fire.

The concert unfolded on a stage built into a towering dystopian cityscape right out of Fritz Lang’s silent classic Metropolis, which blended easily with the old Olympic stadium’s nearly 100-year-old structure. It was all suited to a band with a weakness for big gestures, as Rammstein delivered more than two hours of music and noise from the Neue Deutsche Härte tradition, colliding metal and techno into something distinctly their own: loud and melodic, bleak and often hilarious.

It was their second and final show in L.A. (to be followed by Mexico City and a return run in Europe). Two nights in the city’s oldest stadium is a startling accomplishment for a mostly German-language act, let alone a North American tour, where English is usually a given in rock for the masses. But Rammstein’s appeal is special and intense, crossing all borders like an invading army. Language is no barrier to their sound and raw spectacle.

The band was originally set to tour the world in connection with their 2019 Untitled album, but those plans were interrupted with the arrival of COVID-19 in early 2020, initially pushing the dates to 2021, then 2022. That left unexpected space for Rammstein to go back into the studio to work on another acclaimed album in the interim, this year’s Zeit. 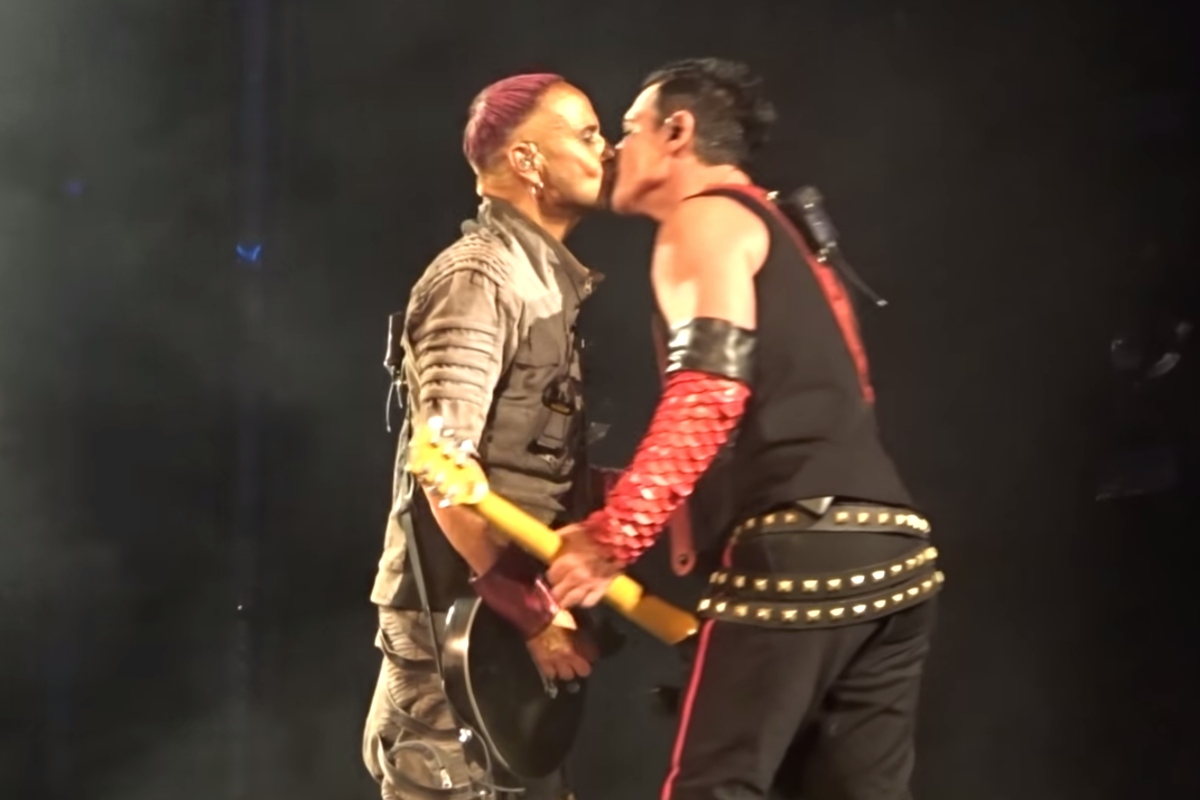 On Saturday, the stadium’s ancient Olympic torch burned atop the peristyle throughout the night but seemed more like a pilot light compared to what was happening onstage. The heat could be felt in the back rows, as waves of pyro ignited not only the stage but on four towers that stood over the crowd, leaving dark clouds of smoke in the sky. It looked like a war zone.

Onstage was the six-man band, still intact since its mid-’90s birth: singer Till Lindemann, guitarists Richard Z. Kruspe and Paul H. Landers, keyboardist Flake Lorenz, bassist Ollie Riedel and drummer Christoph Schneider. Most of them were dressed like futuristic foundry workers, except for the typically quirky Lorenz, whose jumpsuit had extra sparkle fit for a disco night. As usual, for much of the set Lorenz performed in profile while walking endlessly on a treadmill beside his keyboards.

The tough driving riffs of “Zick Zack” (from Zeit) gave way to the band’s sexually charged and hilariously urgent “Pussy” (“Take me now, oh, don’t you see? I can’t get laid in Germany”). For that wildly theatrical tune (from 2009’s Liebe ist für alle da), Lindemann rolled out a silver, phallic-shaped cannon and fired a sudsy white substance into the crowd, soaking the front rows. “Du Hast,” from 1997, was heavy and slamming, all raging guitar riffs and a lunatic electronic keyboard melody, accompanied by mushroom-shaped flames.

Though Rammstein has performed an identical setlist each night (no surprise given its massive operation of fire and machinery that no doubt requires precision), Lindemann’s growled and whispered lyrics always felt weirdly urgent, as fans shouted along.

In one break in the action, a camera feed to the big screen zoomed in on fans, lingering on women until they lifted their tops, or excited dudes doing the same. One bearded guy lifted his shirt to reveal a wolf’s head tattooed to his chest. Soon after, Rammstein moved to a small stage halfway into the crowd for “Engel,” transformed into a piano ballad with delicate playing by tour support act Duo Abélard. The band then traveled back to the main stage in inflatable rafts, surfing over the crowd.

On “Aüslander” (aka “Foreigner”), guitarists Kruspe and Landers faced each other for the intricate cascading melody that closes the song, then leaned in for a kiss. It was just as they did in Moscow in 2019, a meaningful statement in a country with a dangerous “gay propaganda” law on the books, and where the musicians genuinely risked arrest. The band has continued the gesture on the road, and in L.A. got an unsurprising cheer from the crowd.

For “Deutschland RMX,” the band leaned heavily into their techno side, sending Kruspe high above the stage in a DJ booth, where he layered stuttering beats and melody for an anxious dance party. The sound was more Kraftwerk than metal, and the rest of the band lined up onstage in dark jumpsuits with neon lights that turned them into dancing stick figures. The song then evolved into its darker, heavier original, with pounding beats and riffs.

During the final encore of the night (the songs “Rammstein,” “Ich will” and “Adieu”), Lindemann strapped on a pyro backpack that fired flames in all directions as he sang into the mic, turning him into a flaming peacock. All of this insane spectacle would matter a lot less if the music wasn’t so powerful. Rammstein sings mostly in German, but the band’s sound and visions can still leave scars in any language.