It is crystal clear from the happy face beaming in front of me that London-based, 12-year-old phenom Nandi Bushell is not tired of doing press interviews.

“I like them, actually,” she says with a bright smile, her father John at her side, “because I get to tell people like you about my new single and EP.”

The new EP is called Into the Abyss and is her first release after years of very viral, buzz-worthy videos, already-legendary drum-offs with Dave Grohl, numerous television appearances, and more recently, her very memorable and epic performance of Foo Fighters’ “Learning to Fly” at the Taylor Hawkins tribute concert in London. 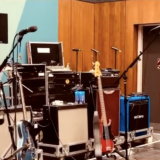 And the single she’s referring to is “The Shadows” (released September 30), an incredibly moving and mature song that she wrote for her dad who found himself deep in depression when his ongoing autoimmune disease got worse earlier this year.

“I was stuck in bed and feeling extremely hopeless and was getting really, really sad,” her father John, also a musician, says, glancing at his daughter. “She wrote this song for me and even used how I described my feelings to her in the lyrics. It was extremely emotional – very powerful – when she showed it to me, and it was a turning point and I got better.”

This serious subject matter is not just limited to one song on the five-track EP. Mature areas are explored on songs, like “Forsaken,” which ponders the senseless reality that some girls in the world still can’t go to school. It was inspired by a song she was invited to sing on by Tom Morello,  called “God Help Us All,” to help Afghan girls and young women at The Miraculous Love Kids school learn guitar under a conservative Taliban government. Throughout this emotional song, Nandi compassionately attempts to put herself into the shoes of those girls at the school who must fight for rights everyone on this earth should have.

Already an accomplished talent, the release of Into the Abyss serves as an official launch into an undoubtedly long and brilliant musical career, one that has deep roots in a tale about an adoring father who would play guitar for his baby daughter, eventually learning later that her musical mind was keeping rhythm all along.

SPIN: Are you excited to release your first ever EP?

Nandi Bushell: Yeah, it’s going to be good. It’s quite different from my other stuff, like rock ‘n roll and my videos.

It’s more inspired by artists I like: Twenty One Pilots, Billie Eilish, Slipknot. I also wrote everything and I played everything. This music is darker.

I read that Ringo Starr and the Beatles were a major influence on you. Who or what else got you into music?

I’ve always liked music. When I was two-years-old, I would play guitar with my dad. He was into music so I got into music through him and my videos.

It sounds like it’s a big part of your relationship.

John Bushell: Yeah, by the time she turned three, she was better at every instrument that I was. (laughs) I noticed at a very early age she had this incredible, natural rhythm.

In the music video that was directed by Edie Amos [for “The Shadows”], she wanted to include some home movies of us to tie together the story Nandi was singing. One of those first clips is of one of the first times we saw Nandi’s natural abilities. When she was two, she’d strum the guitar for me and I’d play the chords and I said to my wife, “You’ve got to film this – this is crazy.” I didn’t realize kids could have such natural rhythm at an early age.

That’s so amazing. What was it like performing at the recent Taylor Hawkins tribute?

It was such a huge show. Were you nervous at all?

I wasn’t really that nervous – I was excited, though. I got to play and meet lots of legendary rock people like Rush, AC/DC, Metallica…lots of cool musicians.

John: And Paul McCartney as well…

When you’re up on stage playing the drums, what’s going through your head?

I think about, “Am I doing this right?” and I regularly practice because I want to get it right. And once I get it right, I focus on performance ‘cause I’m happy doing it and I want to be focused on having fun and doing cool [drumstick] tricks and spins. (laughs)

You have so many exciting things going on these days. Do you have a plan for your career or are you just going with the flow right now?

I would like to write an album by myself and get a band to go on tour and play my songs. But right now, let’s just see how this EP does because I’m quite excited for it and then maybe I can release an album next.

For other kids wanting to get into music, what piece of advice would you offer them?

Well, first, choose an instrument you want to do, so that nobody is telling you to do it and you’re doing it because you want to do it. Then, I would seek a teacher, because that’s going to be helpful, and then I would just focus on playing and having fun and not on the theory. It’s useful to have the grades and theory, but it’s not everything because the main things should be about just having fun.

Having fun is most important.