After hours of emceeing and playing various instruments for other acts, Dave Grohl closed out the Taylor Hawkins tribute in London with the surviving members of Foo Fighters and surprise guest Paul McCartney.

Though no one can replace Hawkins behind the kit, the Foos were joined by a number of drummers during their set, including Josh Freese on “Times Like These” and “All My Life,” Travis Barker on “The Pretender” and “Monkey Wrench,” Rufus Taylor on “These Days and “Best of You,” 12-year-old phenom Nandi Bushell on “Learn To Fly” and Hawkins’ 16-year-old son Shane, who was absolutely thunderous on “My Hero.”

“Pulling this whole thing together over the last three months, we met some really amazing people — people I’ve never met before,” Dave Grohl said after “Best of You.” “One of them, I got to stand on stage with tonight and play the bass: Miss Chrissie Hynde from the Pretenders, who I happen to think is the baddest motherfucker in the world. She brought a friend tonight.” 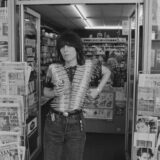 That friend was none other than McCartney, who shocked the crowd by dusting off The Beatles’ “Oh, Darling.” “God bless Taylor,” said McCartney, who inducted the Foos into the Rock and Roll Hall of Fame in 2021. “Me and Chrissie are gonna do a song here that I haven’t done since I recorded it 100 years ago. I’ve never done it as a duet, but we’re gonna do it tonight for the first time, for you.”

McCartney stuck around to sing lead on “Helter Skelter,” not before relating an anecdote about being asked to play drums, of all instruments, on the Foo Fighters song “Sunday Rain.” “This group has two of the best drummers in the world, and they wanted me to drum on it, so I did,” he said with a smile of the track, which appeared on the Foos’ 2017 album Concrete and Gold. “Quite a memory.”

The set continued with “Aurora,” which had earlier soundtracked an emotional pre-show photo montage of Hawkins and, like the two Beatles covers, featured Omar Hakim on drums. “I think this next song was Taylor’s favorite Foo Fighters song, so we knew we had to do it tonight,” Grohl said.

“I don’t think I’ve ever seen anyone hit the drums as hard as this person,” Grohl told the audience when introducing Shane Hawkins after “Aurora.” “Beyond that, he’s a member of our family, and he needs to be here tonight with all of us.”

This was the first time the Foos have performed live without Hawkins, who passed away unexpectedly in March at the age of 50. Tonight’s concert was the first of two honoring the late drummer; the second is set for Sept. 27 at the Kia Forum in Los Angeles with many of tonight’s performers, as well as Alanis Morissette, Miley Cyrus, P!nk, Gene Simmons, Joan Jett, Nikki Sixx, Red Hot Chili Peppers’ Chad Smith and Rage Against the Machine’s Brad Wilk, among others.