Home » Features » Read Me » A Tale of Survival: Long Road: Pearl Jam and The Soundtrack of a Generation

“When I entered the eighth grade in the fall of 1992, it felt like Pearl Jam was the biggest band in the world,” writes Steven Hyden in his new book about the legendary band, Long Road: Pearl Jam and The Soundtrack of a Generation (Sept. 27). Hyden wasn’t too far off. In 1992, the band was still riding the high of their 1991 debut Ten, now, three decades later, known as one of the seminal works of the alt-rock canon and one of the greatest-selling albums in all of rock ‘n roll.

A comprehensive look from the perspective of a devoted (if not sometimes concerned) fan, this book is organized like Hyden’s favorite Pearl Jam mixtape, into chapters corresponding to a specific song and then elaborating from there, taking the reader to many fascinating, surprising places that aren’t well-known about the Seattle icons. This includes a deep dive into the band’s much-talked-about B-sides and many, many live recordings that rival and invite Hyden’s comparisons to the Grateful Dead, who have more in common with Pearl Jam than you may think.

“We all have artists and bands like that who have just been around all of our life and we’ve grown up with them,” Hyden says. His book spans Pearl Jam’s career, from the early ‘90s up until 2020’s dynamic Gigaton. “This is a band I witnessed grow up as I’ve grown up, and I felt like I had a lot to say about them.”

A few weeks ahead of its release, SPIN spoke with Hyden from his Minnesota home about the compelling evolution of this band and why they made it when many of their Seattle grunge-scene comrades faded away. 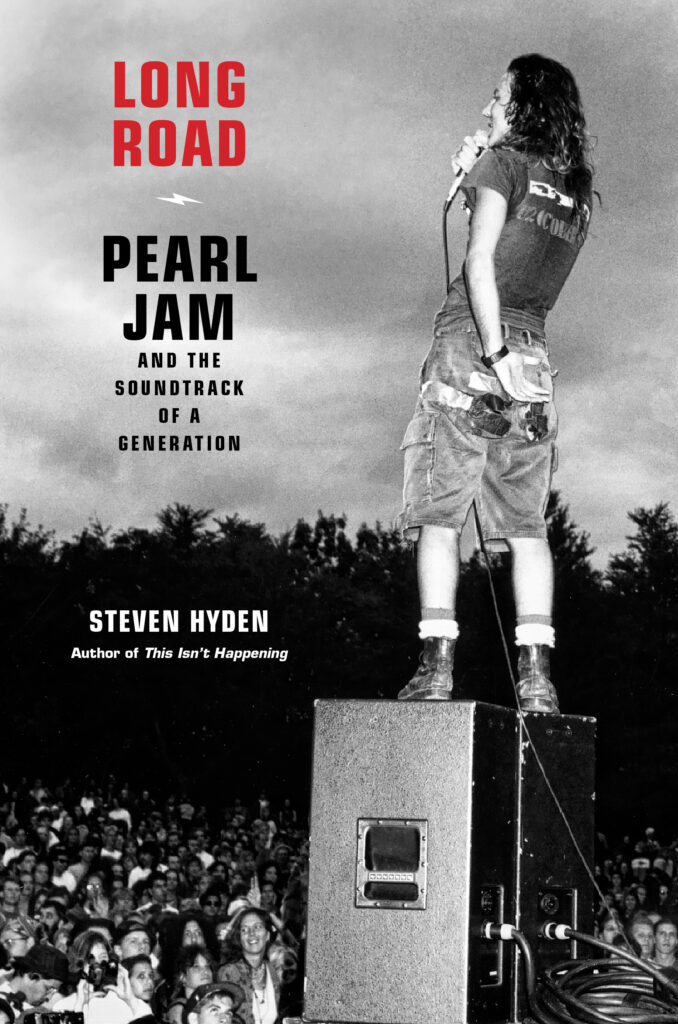 SPIN: What drew you to Pearl Jam?
Steven Hyden: One of the things I’m really interested in as a music critic is bands’ careers and how they unfold and why some bands only last five years and why some bands last for decades. Pearl Jam definitely has one of the more interesting career arches…for any band of their stature.

The fact that they were so popular with their first record–really, the first three records–were just humongous hits, and clearly navigated out of that part of their career to become the band they are now. They are still a very popular band – they can play arenas and even stadiums all around the world and yet they don’t have any media profile, really. They’re very under-the-radar so they can have the best of both worlds – they can have a huge audience but also operate, in many ways, like an underground band.

Why do you think they not only survived but have continued to thrive after so many Seattle bands didn’t make it?
With the bands they came up with, a lot of them are no longer around, especially the big four Seattle bands who all imploded under tragic, self-destructive circumstances. When you factor all of that in, it becomes even more extraordinary that they have been able to persevere for all this time.

Was there a certain part of the book that you enjoyed writing or exploring the most?
The chapter about the 2000 tour where they released a large number of bootlegs. Digging into that period of the band, and some of my favorite Pearl Jam music is from that tour…just how they were able to remake themselves from this very young, operatic band the ‘90s where the songs were very big and very emotional and when you see them live, Eddie’s climbing the rafters and hanging dozens of feet above the stage. In 2000, Eddie Vedder is playing guitar…well…he’s much more than just playing, but it doesn’t seem to have the same visceral impact as seeing them in ‘92 did. If you listen to those [early] recordings…the nuance they were able to pick up and the interplay of the band, it’s so much more subtle and ultimately more interesting and rewarding.

Do you think they’re misunderstood?
I think they’re unreasonably caricatured as a ‘90s band because they were so pervasive for a period of time. They really do seem embedded with a certain idea of what the ‘90s are. Not only was their music so popular, but because they were so influential on other things in pop culture. You saw Ethan Hawke in Reality Bites and these anti-establishment, young and angry guys who all have a little bit of Eddie Vedder in them.

And then all those imitators you mentioned started appearing at the time as well.
There were so many bands that just flat-out imitated Pearl Jam and [it] became a genre unto itself. It made it even more necessary for them to pivot in the way they did because they became very overexposed against their will, in a way that wasn’t really their fault.

“Eddie Vedder” vocal styles became a rock cliché in the matter of just a few years. You can’t blame him for that. That’s just the way he sings and it’s very distinctive, but other people started singing like him. So, it’s almost like it’s not just Pearl Jam on the radio, it’s like there’s 10 Pearl Jams on the radio.

Was there a time when you weren’t such a fan…?
I think like a lot of people, around the time of Yield (1998), I dropped out and didn’t go back for a while. There was a perception at the end of the ‘90s that even though Yield was a pretty successful record, I think there was a feeling that Pearl Jam was winding down at that time.

A lot happened in the seven years up to Yield.

Music had changed so much – the difference between the early ‘90s and the late ‘90s is pretty dramatic in terms of music scenes in the rock world. Pearl Jam, at that time, was feeling a little bit like an anachronism. This was the age of Korn and Limp Bizkit and teen pop and here was this earnest, alternative rock band who stuck out like a sore thumb.

Were you a fan of Pearl Jam right away? From when they released Ten?
No, I liked Nirvana and I really bought into the hype that you had to choose one or the other. (Laughs.) I think I was a closet Pearl Jam fan…like, I liked them more than I wanted to admit.