Home » Features » Odd Jobs » Odd Jobs: How Bouncing Souls Bassist Bryan Kienlen Came to Own a Tattoo Shop When Not On Tour

Tattooers and musicians have been connected at least since Janis Joplin was publicly inked by Lyle Tuttle in April 1970 — six months before her death. But while rock stars have spent plenty of hours in tattoo shops over the decades, few of them actually took the plunge into the industry itself.

Bryan Kienlen of the Bouncing Souls is one of those artists. After beginning his passion for tattoos back in the late 1980s, Kienlen spent some time away from the industry while touring with the New Jersey punks. In 2010, once the Souls had evolved into more of a part-time endeavor, the veteran bassist returned to his other passion, apprenticing under a pair of respected and well-known tattooers and learning the ropes at other people’s shops before opening one of his own.

Now the proud owner of Anchors Aweigh Tattoo (a reference to the objectively best Bouncing Souls album), Kienlen finds himself embedded in both worlds equally. SPIN spoke with the punk tattooer about the balancing act of two unconventional careers and a wide variety of other topics.

SPIN: How did you get started in tattooing?
Bryan Kienlen: It was like actually a passion of mine right alongside music back in high school. I graduated in ‘88, so nobody I knew in high school was tattooed except for this older kid, Brad, who I ended up being in my first punk band with. He was a little bit of a mentor to Pete [Steinkopf, Bouncing Souls guitarist], Greg [Attonito, Bouncing Souls singer], and myself. He got a tattoo, and I was like “Wow!” So I got a tattoo pretty much as soon as I turned 18. It was also around then that I saw the X segment in The Decline of Western Civilization, and we learned how to do hand-poked tattoos on ourselves. Then I progressed to building my own machines, and then I got pretty serious about becoming a tattooer, so I sent away for machines from [famous tattoo supply catalog] Spaulding & Rogers.

And how did your beginnings in the tattoo industry tie into your early punk days?
I feel like I was one of the very few punk rockers getting into tattooing at that point. Actually, we were all skinheads — and I always have to mention that I was an anti-racist skinhead back then, and I very much still am. I started getting into tattooing more, and I thought I was going to be a tattooer, so I started building better machines and tattooing more people. But the band was also getting more serious, and as we were graduating high school, we all moved into a house together. So I had ample people to learn to tattoo on — because everyone was happy to get free ink since nobody had $2 to rub together — but when the band got busy touring, I just put it aside.

What made you decide to go back to tattooing more recently?
Tattooing just simmered on the back burner for me for almost 20 years. Around the time of the band’s 20th anniversary, we decided to pump the brakes on touring as much, because we were living on the road for years and years and years. There was no room for anything else to happen. I don’t regret a second of that. But as soon as we slowed down a little bit, I knew that was my chance to focus on tattooing and really dive all the way into the deep end. I got myself an apprenticeship and started working in a shop, and that’s when I learned how to do everything the right way.

How do you balance the band’s schedule and owning your own tattoo shop?
It’s a full-time life. It’s kind of hard because touring turns everything upside down a little bit. I’m used to that because I’ve been doing it for decades, but it’s harder than ever to leave home because I love my tattooing career. I actually have like two careers that I love equally, and, luckily, I’m not forced to pick between them. They both satisfy a creative urge in me. They’re both really good for my soul. They’re both my happy places. Anyone who has one career that they love is blessed, so I’m doubly blessed. So how am I balancing it? I’m doing a little of both all the time. When I’m out on tour, I’m drawing tattoos and booking appointments. There’s plenty of downtime on tour to get that kind of work done. When I’m home, I’m handling band stuff. Like today, I designed a handful of shirts for Beach Rats, which is my other band — and is also fairly busy. I have two bands that are both dropping records within a year, so I’m designing Beach Rats shirts while I’m putting the finishing touches on the Bouncing Souls record cover for our new record which is coming out this winter. Oh, and I have two toddler daughters. So I’m just busy all the time doing one thing or another. 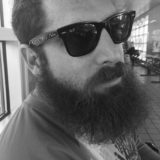 
<![CDATA[<![CDATA[Are there any skills that transfer over between your musical career and your tattooing career?
I’ve had to push myself more because of tattooing. It challenges me and brings out the best in me, and that does carry over to everything I do in the band. Plus, at the tattoo shop, we have a little jam room set up with amps and guitars. We like to learn Hot Water Music songs, and it’s actually at the shop where I finally got fairly proficient at singing harmonies. We almost have a Hot Water Music cover band, which we have a couple of names for, actually. The going name is Caution: A Hot Water Music Tribute, but I really like Warm Water Music, because we’re nowhere near as good. We always make time to do some other things at the shop, so we practice music, we throw knives — which is also really good for our focus — we stretch, we meditate, we have dumbbells and boxing stuff so we can spar. All of this stuff is not only great for our mental health and our focus, but trying to learn Jason Black’s bass lines has made me a better musician. It’s actually influenced a lot of what you’ll hear on the next record.

Is there anything that surprised you about diving deeper into the tattoo world when you came back to it 20 years later?
I found it to be so grounding. I think if I didn’t do that, I would have run out of things to write about. I was a full-time band guy just circling the globe on tour for so long, and I think getting a job, having a boss and having a daily grind and responsibility. It really grounded me at the right time. I think band guys live in a bubble, and it was really important for me to just have a normal working-class life. It was also really important for the Bouncing Souls to stop being so full time, because you just have to become a little more well-rounded as a person. You learn a little humility and pride in your work and all that, and I’m really glad that I have a day job now. It makes the band more meaningful now, because when we play shows as the Bouncing Souls, it’s because we want to be there, not because we have to be. Having both things enables me to do both on my own terms. Everything just feels fun and new all the time. It’s amazing. They both stay fresh. They never get stale. We’re just stoked when we get together to do stuff, and it all feels like a bonus. It’s just a great place to be for the band and also for tattooing. Tattooing has been so good to me, and I plan on tattooing as long as I physically can — which will be somewhere in my 70s, I’m guessing. That’s how we feel in the band now, too. Why would we stop this thing that we’re doing for our own happiness?