Home » New Music » All Eyes On » Blondshell Is Finding Beauty in Love, Anger and Sadness

In about three weeks, Sabrina Teitelbaum will hit the road opening for Porridge Radio as part of her first proper tour as Blondshell, capping an artistic journey that began by absorbing her parents’ favorite music as a New York City teenager, discarding it in favor of grunge, new wave, and Britpop and eventually summoning the courage to start performing at local open-mic nights, including one above the M&M’s World store in Times Square.

“I had terrible stage fright as a kid. My dad’s idea was for me to play for his friends when they’d come over, but that didn’t help,” Teitelbaum tells SPIN. “So I just Googled ‘open-mic nights.’ I was underage, so my sister would go with me. I’d be trying out stage names — Sabrina Teitelbaum isn’t a great stage name [Laughs]. It just doesn’t flow, you know?”

Just as the name has changed, Blondshell represents a creative breakthrough for Teitelbaum. The new music transcends her previous projects thanks to her willingness to tackle such weighty topics as sex and sexuality, recorded under the watchful eye of producer/Yves Tumor principal Yves Rothman. “I think I need music more now than I needed it when I was 19 or 20,” she admits. “I just don’t have the desire to say anything other than the things I need to say, and that changed my music a lot from what it used to be like.”

On the heels of the buzz-generating first official Blondshell tracks “Olympus” and “Kiss City,” new single “Sepsis” ups the emotional stakes, as Teitelbaum sings about reluctantly going back to a “dick” boyfriend in spite of her therapist’s recommendations. “I’m just pissed in that song, and I wrote the song because I was pissed,” she says. “I don’t know why, but that feels like a less scary emotion to sing about. I was listening to a lot of grunge when I was writing this album. I felt like those artists must feel so much relief from singing these songs. I wanted to have one specific to my experiences, so that every time I sing it, I can feel that relief too.” 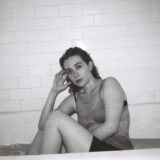 Blondshell’s sound and vibe should strike an ear-grabbing chord with fans of Liz Phair, Phoebe Bridgers, and Japanese Breakfast — artists who write love songs laced with humor, anger and sadness and aren’t afraid to rock out one moment and get mellow with a ballad the next. “‘Kiss City’ is the most vulnerable one for me, because it’s talking about intimacy,” she says. “That one represents me putting on my big girl pants and talking about the scariest things. I wrote a lot of songs just for myself, but putting ‘Kiss City’ out was my way of being like, I’m not going to keep these songs as diaries. I’m going to share them with people.”

With record labels circling and Blondshell’s full-length debut expected next year, the focus for the moment is on the live show, which Teitelbaum says will feature a wealth of unreleased material (and, most likely, a Wilco cover). “I feel like as a new artist, you’re asking a lot of people if they don’t know any of your songs and you’re an opener, so it’s good to have a cover in there,” she says. “The fun thing is that I’m not playing guitar live. It lets me dance and move around, or not dance and put all my energy into singing and telling stories.”