The Murlocs conjure a beguiling cast of misfits, skate punks and petty criminals on their sixth album, Rapscallion, inspired in part by frontman Ambrose Kenny-Smith’s real-life upbringing in the southeast Australian port city Geelong. Rapscallion is due Sept. 16 from ATO Records and is led by the single “Virgin Criminal.”

“It’s about him doing his first crime, ripping off a convenience store and getting off on the thrill of being an outlaw,” says Kenny-Smith of the song and the nameless main character whose adventures are woven through Rapscallion.

The 12-track album is the follow-up to 2021’s Bittersweet Demons and was recorded in band members’ individual home studios during the first era of the COVID-19 pandemic. Kenny-Smith and bassist Cook Craig are also core members of King Gizzard And The Lizard Wizard and are flanked in The Murlocs by guitarist Callum Shortal, drummer Matt Blach and keyboardist Tim Karmouche. 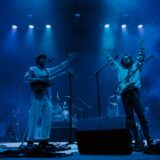 With Kenny-Smith having begun to contribute more to the songwriting and singing in the “fast-moving train” that is King Gizzard, he encouraged Shortal to take the reins on Rapscallion. “Cal really spearheaded writing the songs on this album,” Craig tells SPIN. “It’s kind of garage-y and pretty bumpin’.”

The Murlocs will hook up with King Gizzard for a handful of shows on the former’s fall North American tour, beginning Oct. 29 at the Levitation festival in Austin. The Murlocs will then continue on with dates featuring support from Grace Cummings through Dec. 2 in Los Angeles. Tickets go on sale Friday at noon ET through The Murlocs’ Web site.

As for King Gizzard, the group has already released two albums in 2022 and last month revealed plans to release three more before the year is out (specific dates have yet to be confirmed). The first two of the next batch were built from all six members jamming for hours, a process similar to the one that birthed the 18-minute “The Dripping Tap” from the latest Gizzard release, Omnium Gatherum.

The last of the bunch is something Gizzard has been working on since 2017 — the longest amount of time the band has ever spent on a single record. “There isn’t a jamming vibe on it. It’s super considered, for a Gizz record,” frontman Stu Mackenzie tells SPIN. “Every overdub and every part is important. I suppose I would call it more of a song cycle. There’s something fitting about that one having taken so long to make and then wrapping the year up with it.”

Here are The Murlocs’ tour dates:

King Gizzard and the Lizard Wizard, The Murlocs