“I used to play high school basketball,” Perry Farrell says, serving as a message to his opponent, me. Standing in the Lollapalooza press area mid-Friday afternoon, the Jane’s Addiction/Porno for Pyros singer (and Lollapalooza co-founder) has his eyes on one thing: a basketball version of Connect 4. He bested Post Malone in a game of beer pong at a Lollapalooza in South America in 2019. Basketball and Lollapalooza may seem like an odd pairing, but Farrell says that legendary rock promoter Bill Graham kept a basketball hoop at Shoreline Amphitheater in Northern California, which is why it was a favorite destination during the festival’s touring years.

Firing off mid-range jumpers amid a crowd of curious onlookers including a film crew following him around, the now-63-year-old father of alternative rock (who has a drink in one hand and a basketball in the other) is unfazed. He marvels at how Lollapalooza has emerged as a global force. Recent festivals in Stockholm and Paris were earlier this month, and the festival announced last week that it will head to India in 2023.

Even with those international events — including the now-standard three dates in South America every March — Farrell is the most excited to reveal that Lollapalooza will remain in the Windy City for the next 10 years. Chicago Mayor Lori Lightfoot made the announcement ahead of BTS’ J-Hope’s headlining set on the Bud Light Seltzer stage. For Farrell, it marks a continued love affair with the city, which has been Lollapalooza’s flagship home since 2005.

“We love calling Chicago our home away from home,” he says of the renewal, briefly pausing the basketball action to grab his alcoholic beverage that he set down when the game started. 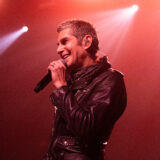 Perry Farrell Is Not Most People

Since its 1991 start, Lollapalooza has emerged as one of the most important festivals in the U.S. It not-so-coincidentally coincided with the rise of alternative rock. Looking back at those early days and the carnival-like atmosphere (one reason why SPIN named it the best concert of the past 35 years not too long ago), Farrell remembers how it swept the nation.

“I loved it because we were able to travel,” he says of the early era. “That was what was different from Woodstock, as an example. Woodstock was an amazing destination. But we were able to take it and bring it to different cities— a musical caravan. By the time we reimagined it here in Chicago, it was wonderful. You have a chance to think all year about one weekend.”

As hard as it is to admit his favorite year, two lineups stand out from the pack.

“I always loved the one that had George Clinton, Beasties and Smashing Pumpkins,” he says as he strategically flings the ball at the big board. “Green Day was even at that, and Nick Cave was there. The same with 1992 with all of those bands, and that’s when I introduced the second stage because there were too many groups to leave out — and now we have eight stages and 150 bands.”

The festival has evolved from those early years, which Farrell describes as “an old trading route for musicians, like a Silk Road.” Though not the monster of alternative rock it once was (its two main stages are branded by Bud Light Seltzer and T-Mobile), its return as a Chicago festival reinvigorated the brand. Adding extra stages (including his own stage dedicated to dance music) and the massive Grant Park footprint, Lollapalooza remains a launch pad for many artists — even if last year’s fest wasn’t without controversy when it became the first large-scale festival to take place during the pandemic.

“Now that we’ve got it going around the world, it’s just a start,” he says. “Where we’re needed and where we’re wanted, we will show up. That’s what I think the world is coming to culturally. It’s no longer about borders, but it is about unity. We use this as our vehicle to come and, as like I say, ‘share the love, spread the love.'”

Despite being halfway through his drink, Farrell could be the New York Knicks Hall of Famer Walt “Clyde” Frazier (“I loved those Knicks teams of the ’70s,” he says.) of alternative music as he drains a third straight shot, blocking his opponent’s path to victory. As the crowd swells, it doesn’t distract him from the task at hand. With the sounds of the nearby T-Mobile stage emanating in the background, Farrell excitedly brings up his new venture, Heaven After Dark Imprint Label. As he sinks another jumper, Farrell boasts about its first single, Pink Panda’s remix of his wife, Etty Lau Farrell’s The Crystals cover “He’s a Rebel.” “Go figure that it’s her song that’s released before mine,” he jokes.

“Everybody was up for it except for Martyn,” Farrell says. “Martyn wasn’t quite there yet, but behind the scenes, Martyn and I were recording new material. I love Martyn, and we had a bad falling out. It happens, that when you’re a young man, you make stupid mistakes. And then hopefully, before you die, you can correct some of them or most of them.”

When the band played at Welcome to Rockville, Watt was still on bass, which rankled LeNoble enough to reach out to his former bandmate.

“Mike did the show, and I got a text from Martyn that said ‘I just find it very interesting that you didn’t invite me,'” Farrell says. “So I said, ‘I’ll tell you what. I got this other gig, Lollapalooza, and let’s play that.’ And we have been so happy, so happy together since.'”

Before the unexpected reunion after two-and-a-half decades away, the last festival the band played together was the 1997 Tibetan Freedom Concert.

“I was running around with Sean Lennon doing interviews,” Farrell says of that muggy June afternoon at Randall’s Island in New York. “And our wonderful Adam (Yauch of Beastie Boys) was still around, alive and running things. Yeah, those are good days. Great event.”

As for this game, after a back-and-forth affair that goes 15-16 shots, Farrell makes the final one to win Connect 4. The crowd dissipates and with a film crew in tow, Farrell heads back to his (by festival standards) large-sized compound behind the main stage where additional business and hosting awaits.

Despite it being one-and-done, Farrell says not to fear.

“We’ll do this again next year,” he says, flashing a smile. “Because we’re not going anywhere.”